Before finally dismantling the dish a sked was setup with W5LUA at low elevation to try and get better dish tracking.  SUCCESS!  W5LUA (#1) was my 1st 6cm QSO after all the years of trying.

Keen to build on success a sked with K5GW was setup for July 21, again at low elevation. This was also successful in 20 minutes, K5GW (#2).

So after all these years of attempts and frustration I finally had EME qsos on my 7th band!  Time to celebrate

On July 15 worked WA6PY, W5LUA and G4CCH (initial #25) despite water getting through the  tarpaulin and into PA during overnight storm. Conditions however were much better than previous day with less fadeouts.

Saturday night I was hit by an inspiration as to how to get  more than one "split" TX/RX frequency pair available on the K3. The K3 has the capability for 10 transverter bands. I realised there is NO requirement for the Transverters to be configured to be on different bands. I used the utility program to save an image of the K3 before I started playing with the menus. XV3, XV4, XV5 and XV6 were all set up as 3400RF, 28MHz IF, Internal transverter -1dBm IF drive, with no frequency offset (the 9cm transverter and evrything in the K3 is GPS locked). I can setup XV3 with the TX/RX frequencies to hear my echoes leaving the other three to be setup as needed to work stations with the option to quickly switch back and check echoes At the end of the weekend I could restore the K3 to transverter normalness by reloading the saved image using the Utility programme

Preparations for the 9cm activity weekend

After a disappointing period on 6cm it was time to return to the usually satisfying 9cm band. As the weekend of  Jul14/15 was a planned 9cm activity weekend,  preparations began on July 11 to allow for issues. The feed was changed in 98 deg F temperature and the transmit equipment seemed to work. However the G4DDK preamp produced no noise. It worked on the noise figure meter giving 0.64dB NF. It should be lower than that so the FET was replaced and the preamp readjusted until 0.53dB NF was obtained. The preamp was put back on the feed and it was noted that the DC preamp dc connector was intermittent so they were replaced and the receive side behaved again

To test the system a sked with Charlie G3WDG who I had never worked on any band off the moon was arranged for very early Thursday morning (0520 local!).  A two way QSO was had with O/O report. As a followup Meg activated her N2NQI call and had a YL/YL qso with Petra G4KGC. 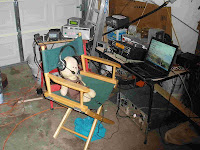 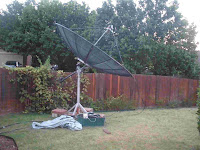 
Having made up the audio cables for the KX3 it was time to try it on QRSS (slow speed morse). As Bill W4HBK was running his QRSS grabber on 40m Friday night it would be possible to see the on air signal. The following is a capture from Bill over a 6 minute period

The upper signal (N4FRE) is the GPS locked ARDMEPT. The lower DFCW signal (WW2R) is from KX3.  Both signals have 4Hz frequency shift and are running 200mW  The drift on Transmit noticable on the KX3 and a little unpredictable; the pattern between different (even adjacent transmit period)  periods is not the  same

The following shows a comparison between the two signals over a two hour period. Each transmission is repeated every 10 minutes, synchronised to GPS. The good news is that the long term stability is good, It doesnt drift too much over the period BUT the bad  news is that the short term drift over a couple of minutes is not good enough for QRSS

Unlike the Elecraft K3 there is no provision to lock the KX3 to an external high stability oscillator. The KX3 uses the SI570 chip that is self contained. Looks like the KX3 will need a lock board for narrowband modes.

Todays USA holiday was used as a chance to catch up on some radio projects.

First I tried out the 6GHz TWT and power supplies which failed during last weekends activities. Miraculously both now worked, one pair produced 27W the other, a bit more temperamental,  only 15W so they were put aside for operations this weekend

While having coffee at around 1700z heard the WF9XRU beacon from Virginia on 70.005 at 529.Antenna is Dipole at 20' feeding a microwave modules converter into the K3

Next the KX3 was interfaced to the Ipad to use the ISDR app as a panadaptor. An IMIC is connected to the IPAD through the Apple USB "camera adaptor". A 3.5mm stereo to 2.5mm cable was made to connect the IMIC to  I/Q output of the KX3.  Note the demodulated audio comes out of the "out" connector of the IMIC, NOT the Ipads speaker, so this was fed to some amplified speakers I have that are normally used for the HPSDR. It worked well but it took me ages to find how to set the vertical signal axis. I eventually found the answer on the ISDR yahoo group. This setting is not controlled from within the ISDR programme but is set from within the "settings" "ISDR" of the Ipad itself. Initially I had to reverse the I/Q settings in ISDR but eventually I crossed over the tip and sleeve connections on the 3.5mm connector and set the menu entry to "normal". The following is a screen capture of 20m from the Ipad 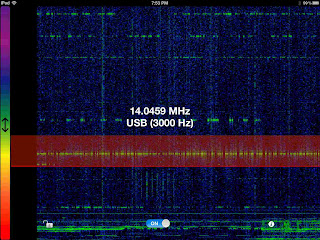 Next it was time to make some audio cables to allow the KX3 to be used on digital modes. Unlike the K3 the KX3 does not have isolated audio inputs and outputs which in the past I have found essential to avoid ground loops. Luckily I had previously made a box containing 2 audio transformers to isolate the audio paths for my now sold FT847. receive and transmit audio paths so matching cables just had to be made. The audio comes out of the KX3 from the 3 pole 3.5mm speaker connector. The transmit audio input to the KX3 and the PTT signal  were input to the KX3 via the 4 pole 3.5mm MIC connector using a resistive divider. the speaker output Voltage from the computer is far too high for the KX3 mic input. To try it out I used JT-65HF to have a few QSOs with success. It also drives the new version of Argo used as a QRSS grabber fine.

Finally I installed the Hetrodyne App for the HPSDR on my ipad.This provides a panadaptor display and can decode various modes (USB, LSB,CW etc). The LAN port of the Metis card is connected to a Netgear WNCE2001 configured as an access point which the Ipad can see from anywhere in the house. Now I am glad I upgraded to a 802.11n WIFI router. The following is a screen capture from the Ipad 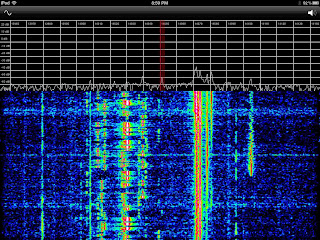 For the want of a KXBC3

Initial testing of the KX3 was using a set of 2300mAH NiMH cells I bought off amazon.com when i placed my KX3 order. Eventually they discharged forcing the KX3 to power down, (even after setting Vmin from the default 11V to the recommended 8.5V) but as the KXBC3 internal charger wont be available for a couple of months I needed an immediate solution. Looking on ebay I found an 8 cell NiMH charger for $20 shipped that would suit the purpose. I made sure it could accommodate 110 and 230V mains. Today it arrived so I can now again use the KX3 in a truly portable manner 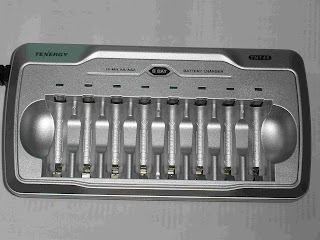