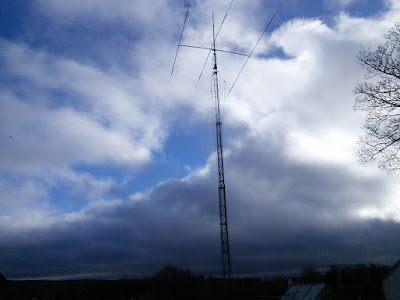 This is a fun contest. It starts and finishes at a reasonable hour (noon) and as a sprint only serial numbers are exchanged; no reports. The hardest part was that neither the confirmed dates, rules or the experts list were available on the BARTG web site or any hint where they were located before the contest

Radio conditions were poor. 15m only opened for 30 minutes on Sunday morning. 20m didnt have the usual quantity of far eastern DX. 40m was subdued. 80m was good overnight into the USA, the only failure was AD5XD in Texas, despite many attempts. The highlight was being called by YC4BGN on 40m Saturday night giving me the 6th continental multiplier (OC).

The dual vfo FSK configuration using a pair of TinyFSK worked very well using the method by K0SM , Although N1MM v1.0.7013 was supposed to support TinyFSK natively, when tried it showed highly corrupted text in the transmit window meaning it could not be used effectively to see what was being sent! Hence I resorted to the K0SM setup configuration

There were no equipment issues. I used my newly made accesory cable to replace the elecraft made one that caused trouble the previous weekend on the RSGB Data AFS which worked fine switching the KAT500

The original plan was to operate with G4BVY from GW0FRE. However he was detained elsewhere so I would have to do it single operator, I decided to use MW2I

As it is a dual band (80/40m) dual mode contest (RTTY/PSK63) I could not just use MMTTY. At his talk on data modes at the Malvern club G4BVY suggested using MMVARI, which I hade never used before. Using it on AFSK you could have one window for RTTY QSOs and one for PSK31 QSOs. With Rogers remote guidance (including a Skype call 10 minutes before the contest!) I managed to get it going

Originally I had intended to use the KPA500/KAT500 at 400/100W output. However during pre-contest testing there were many issues with the switching. Most often with the correct antenna and band selected on recieve, when i went to transmit the amp would change band (sometimes with "Invald" on the KPA500 display) the atu would switch antenna and try to tune it and the KPA500 would fault out.  With time running out a decision had to be made, so i used the K3s barefoot at 100w with its internal ATU and the 2 antenna ports switching between bands

Conditions were poor on 40m, just 6 RTTY (no PSK) qsos into central europe. 80m had a reasonable rate

After the contest I investigated the issue further. It was narrowed down to the 15pin to 15pin aux cables supplied by elecraft with the KAT500 and KPA500. One worked fine but the other appeared to have an intermittent short between the band1 pin and the ptt (hence why it changed band when going to transmit).  During the following week I cut apart the molding on the faulty cable and saw how unreliably it was assembled. Although their was a clamp that held the screen, which was doing a reasonable job on the screen, it did absolutely nothing to stop the cables in the bundle moving and rotating. This had happened and the band data lead was wandering around the plug, touching the PTT pin. 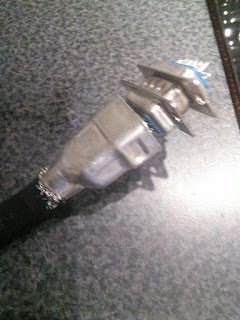 I looked at the cost of a replacement cable, but at nearly 50 pounds and the photos not assuring me the cable grip method was any better I decided to make my own

A search of the Farnell website revealed a 15 pin HD metal shroud that had a selection of cable clamps that would grip any cable firmly. They were not cheap (6.52) but I needed reliability.

As the Elecraft aux cable used only 10 cores I found some 10 core+screen cable and made a pair of 1 metre long 15 pin male to female cables; enough for the KAT500 and KPA500. I also made a shorter cable that could be used to connect the KAT500 to the KPA500 when the ATU is sitting on top of the PA,

I also found my 3 metre 15pin to 15pin all pins connected cable (with moulded plugs), As it had 2 female connectors, i chopped it in half and with two of my newly purchased connectors made a pair of 1.5m male to female leads. These cables are useful when connecting to my K3 switching box which has a possible need for all pins
Posted by g4fre at 15:54 No comments: