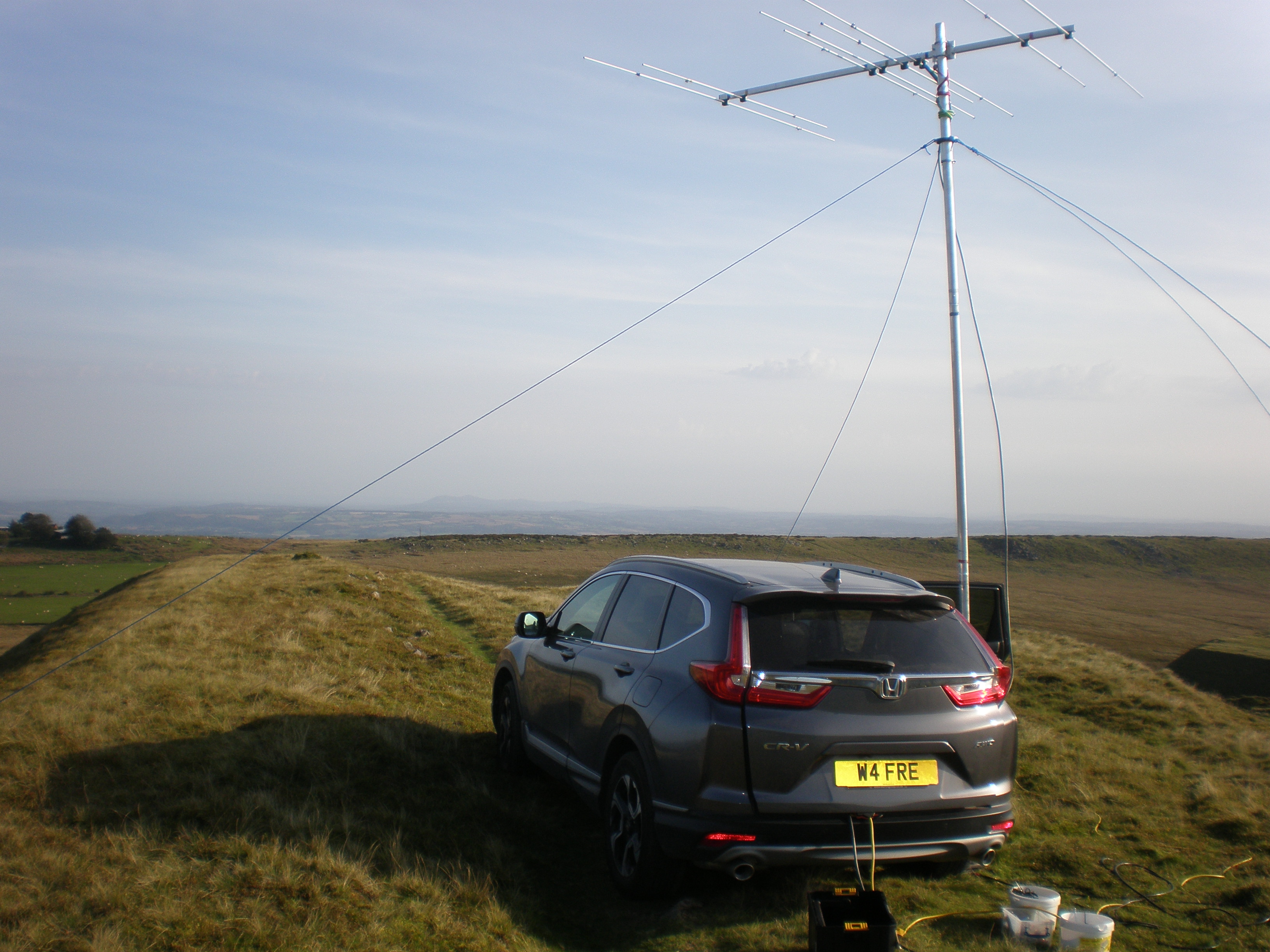 Having participated in the BATC 144/432 MHz contest (and won it) It was time to think of the upcoming 50/70 MHz contest. Originally slated  for September 19 and 20, after I pointed that the sunday clashed with the RSGB 70 MHz AFS contest it was changed by BATC to a saturday 1300 to 1900 contest. As the IO82lB site, used for the 144/432 contest has interference on 70MHz somewhere else was needed. The previously used IO82QL Titterstone clee site was chosen

The thought of putting up a 5 ele on  6m and a 5 ele on 4m was discounted  quickly. I remembered that back in 2014 I bought an Innovantennas  dualband 4 ele on 6m and 4 ele on 4m antenna so that was unpacked (for the 1st time) The assembly manual wasnt very helpful, but a few emails to Justin got the answers. The boom and 4m elements fitted in my car, but one end of the 6m elements had to removed so it would fit.

Arriving on the site around 1000 it was found to be very very windy. The HF dipoles of the IOTA contestants were blowing all over the place. The possibilty of not being able to put up the antennas (one for the 50/70MHz yagi one for the 144/432 talkback colinear) was considered. As a test the 4/6m antenna was assembled on the mast and eventually raised to the skies. The swr was 1.8:1 on 6m and 2:1 on 4m but this was not a day to adjust antennas. It ws decided another mast was too risky so 2m talkback ideas were abandoned!

Had a 2 way on 4m with G8GTZ (MER15) Tried on 6m, Noel copied my signal easily but due to loud interference coming from the radio station at the bottom of the band I struggled to receive him, but eventually I copied him at 66ks near the top of the band (for my only 2 way QSO). Worked G0MJW on 4m (MER6). Due to the fine work of Noel acting as a Zello to 2m transponder, hooked up with G8VPG and had a 2 way with him on 4m (MER 16) When he turned his beam on noel he was still MER8 with me! Tried 4m and 6m with M0DTS with no luck, but my 4m signal was detected!. Worked Arthur G4CPE (for the 1st time!) on 4m (MER peaked at 7.5) at 156km for my best DX. He could not copy my 6m, probably due to cross polarised antennas. Copied Noel at MER6 when he transmitted 4m at Arthur! Managed to get my 6m received by G0MJW in the final act of the day

Having put the 47GHz system in a box it was time to try it out. An opportunity arose with the upcoming 47/76GHz contest so a visit to Cleeve common IO81XW was organised
As GW3TKH was going portable on the Blorenge IO81LS I Initially set up on the west side of the summit. We first tried on 24 GHz and signals were huge both ways on NBFM with both GW3TKH/P and GW4HQX/P. Moving to 47GHz signals were equally loud on NBFM  both ways with GW3TKH/P but I had to resort to SSB to work the GW4HQX/P QRP 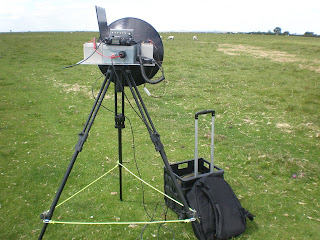 Having assembled the transverter in a box as described here it was time to try it out. An opportunity was  found with the upcoming 24GHz to Light contest so an outing was made to visit Cleeve common. As the weather was going to be good it was decided to visit the trig point IO81XW90 with its good all around coverage. 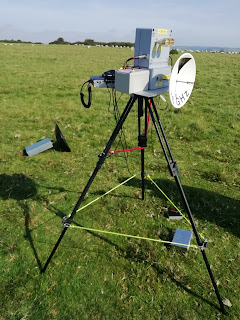 qsos were easily had with GW3TKH/P amd GW4HQX/P when using the 12" Procomm dish
Posted by g4fre at 19:20 No comments:

Having also bought a DB6NT 76GHz transverter recently I decided it was time to be put in a box and join it's 47GHz cousin in the field.

It was found that the same size box as used to mount the 47GHz transverter would be suitable. However,  how to get RF signals in and out would be a challenge. After a long search a pair of 90 degree WR15 H plane bends were found on Ebay. They were similar but not identical in dimensions. These would allow the transverter to be mounted on the base of the box with the waveguide bends poking through holes in the sidewall.

The box was fitted with a an N type socket for the IF and a TNC socket for the 10MHz reference. A 3 pin XLR was used for the 12V power. A power LED,  lock LED and transmit LED were fitted

The local oscillator was mounted directly on the base of the box alongside the transvreter. As the 76GHz portion of the band used in the UK is 75976 MHz and the transverter has a 144MHz IF the local oscillator was programmed for 9479 MHz. Note that this is not an available standard frequency available in the MKU oscillator. I chose to reprogram the unit and replace the existing 9486 MHz 76 GHz LO with the 9479 MHz one.

The transverter has an RF output power Indication  which was connected up to my usual LM3914 and 10 LED bargraph indicator. Initially this was mounted inside the box on the local oscillator but it was found after its first outing to be more useful if visible from the outside ao a hole was filed and the unit mounted. 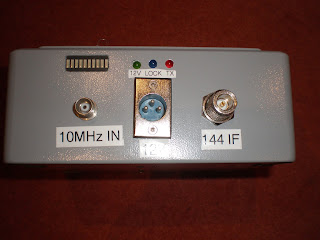 Having bought a DB6NT 47GHz transverter last year I decided it was time to use it, especially as I had a pair of W1GHZ horns that would avoid the need for a T/R relay.

Finding a big enough waterproof box for the xverter module was an issue but one was eventually found that was a close fit. It mounted fine in the box but the SMA plugs on the ends made it too long. Using a dremmel some of the inside walls of the box  were removed and it just fitted, even if the SMA plugs could not be unscrewed in situ!

The box was fitted with a an N type socket for the IF and a TNC socket for the 10MHz reference. A 3 pin XLR was used for the 12V power. A power LED,  lock LED and transmit LED were fitted.

The transverter has an RF output power Indication  which was connected up to my usual LM3914 and 10 LED bargraph indicator. Initially this was mounted inside the box on the local oscillator but it was found after its first outing to be more useful if visible from the outside ao a hole was filed and the unit mounted 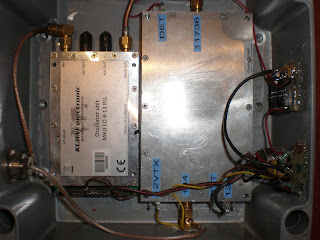 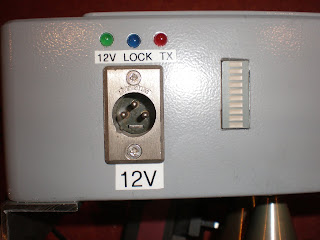