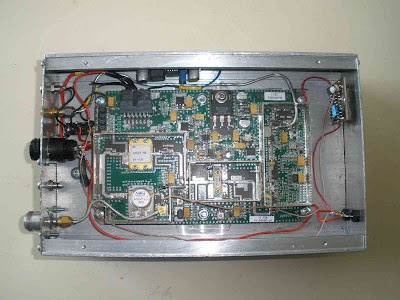 Having finished the 13cm Transverter it was time to consider an amplifier. Searching in the wardrobe  I rediscovered the metalwork that I assembled for a 13cm 13.8V PA module that was the driver module inside the Spectrian amplifier which was being sold by PyroJoe on ebay. I had mounted it on a heatsink and done a quick test when it produced 20W but it needed finishing

I added connectors, relay switching and a bargraph LED power meter on the front panel. With 5mW of drive it produced 18W but could not be persuaded to produce 30W.  One pin of the PA module needs earthing to activate the PA but another pin needs a voltage to supply the bias. I was applying 12V as it was available and I assumed it just needed to turn the bias on. Just in case, I dug out the email from PyroJoe with the pinouts and I noted he specified 28V. I hooked up a 28V power supply to the bias pin and sure enough the amplifier produced 32W with 5mW of drive. Looking in the PCB box I found a 2x1" chinese 12V to 28V(adjustable) DC-DC converter which I managed to squeeze into the box and it still produced 32W on 2304 and 2320MHz.  All that was needed was to make a cover for the box; another finished project.
Posted by g4fre at 02:24 No comments:

About 6 months ago I started on a suitable transverter based on some components I had lying around. A packaged mixer, 3.9GHz filter that retunes to 13cm, spare 13cm preamp and a DEMI TCK. Today I actually finished it. It produces 50mW and has a 0.9dB noise figure. It has an internal 10MHz crystal oscillator and provision to use an external GPS derived 10MHz reference. Provision was made to work crossband, the receive and transmit local oscillator frequencies are set with a pair of rotary switches 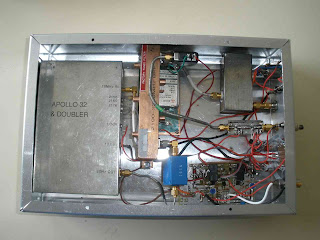 ADS-B using Ubuntu and the RTL2832

The next task for the RTL2832 was  to decode aircraft transmitting A-DSB using Ubuntu. Doug G4DZU had previously pointed me at a link http://www.hamradioscience.com/the-rtl-2832u-sdr-and-ads-b/ with an idiots guide to doing it , so it was time to try
.
Installing gnuradio took one line (and patience):-

dinner and desert  and a coffee later it finished. Time to see if it worked:-

Next time to plot the data. The article  pointed to Virtual radar server at http://www.virtualradarserver.co.uk/Mono.aspx so this was installed. Launching it with and clicking on the http link for local host resulted in the following map with 8 aircraft:- 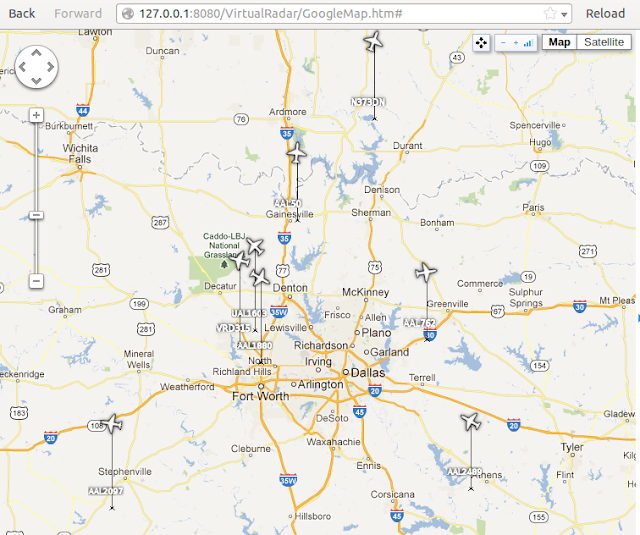 The rtl2832 is not as sensitive as the Modesbeast I also have but it is only 5% of the cost!

From previous RTLSDR research I concluded I needed a Linux machine to use the RTLSDR as a GPS/ADSB/ WiFi decoder. I was having too much fun with the RPI to use it so I looked in the storage room and found a spare SATA drive for my Dell D630 laptop with caddy which would allow me to swap between windows and ubuntu easily . Web search revealed others had use a Dell laptop to isntall Ubuntu successfully, so it was time to try.

I downloaded the Ubuntu 12.04 LTS .iso image from http://www.ubuntu.com/download/desktop and made myself an install CD. Booting the laptop from the CD drive the install started. I allowed it to install updates as it went (over the LAN connection) but it took 3 hours to finish (never again will I complain about the install time of WINXP) Then it took another 3 hours to navigate round Ubuntu and see what I could do. Google.com searches answered all of my "but how do you do it in Linux" questions. I also got to install some packages, just like I did on the Sparc based network infrastructure of Nortel! It was amazing how much Linux I had remembered! The fun was terminated at 1am.

With the passing of the Labor day holiday, which traditionally marks the end of Summer in the USA it was time to think of the upcoming LF season. I usually use the HPSDR to receive as it goes down to 100kHz but I want this year to see what is happening on 500kHz from around the house (ie outside the shack). Browsing the openhpsdr web site http://openhpsdr.org/download.php I noticed the ghpsdr3-Qt software which can operate on a server client basis. There are 3 parts to the software,  QtHPSDRServer, which connects to the HPSDR, QtDSPServer  and QtRadio which provides the GUI and audio. All three programmes can be on the same machine, attached to the HPSDR or   QtHPSDRServer and QtDSPServer can be on the HPSDR attached machine and Qt Radio on another machine somewhere else in the Internet cloud

The ghpsdr3-Qt Windows Binaries prepared by KV0S was downloaded and ran. QtHPSDRServer was run but no connection to HPSDR started. It seemed to be looking on a strange IP for the HPSDR which I found specified in QtHPSDRServer.ini supplied in the package.  I deleted the .ini file and it generated a new one. Still no connection and the discovery process didnt work.  Two hours later I found that even though I only have one LAN port on my machine called "Local Area Connection" I had to name it in the .ini file ("interface=Local Area Connection")  Having done this discovery worked and QtHPSDRServer connected to the HPSDR. Progress.

After adding the machines IP to QtRadio.ini and launching and starting QtRadio we had action. I could hear stations and tune the band on 40m. 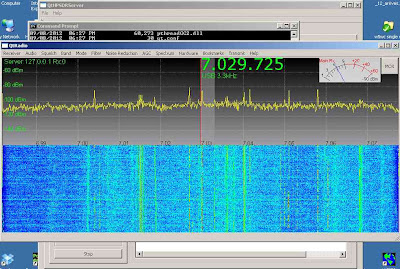 I then installed QtRadio on my laptop and could connect to the HPSDR from around the house. Mission Accomplished.I must thank KV0S for answering my email questions on QtRadio.

I ordered the base unit with no accessories as I thought I had what was needed already in my collection. It was ordered from MCM Electronics on Sept 2. Despatch notification was received on Sept 4 and it was on my doorstep  Sept 6. So much for long delivery times!

I built the default OS on an 8GB SDHC card under windows using the instructions at http://elinux.org/RPi_Easy_SD_Card_Setup. This proved to be much less problematic that expected. Then I went to power up the board. However hard I looked I could not find a USB A to micro USB B cable which was needed to power up the RPI.  I can see a visit to the local computer shop tomorrow.

I did discover a "Basic" for the Raspberry Pi called DexBasic The IDE for this has similarities to the one for the Arduino which I have used a lot. The link also has tutorial. I did manage to complete the Intro page tutorial and put it on a 1GB SDHC card, but will have to wait until I get the power lead to see the result

While waiting I decided to try out the Beaglebone. It is a rev 6 board. Searching the Internet I found some tutorials from adafruit http://learn.adafruit.com/beaglebone Unfortunately the instructions for installing the USB drivers are for Rev5 boards and I was left with complaints that drivers for an SUBARTIC  USB device had not been installed and beeps every minute. So I disabled it while I find out why. Undeterred I continued with the Ethernet tutorial which went fine. I must wait to try out the WiFi tutorial until the module used comes back in stock 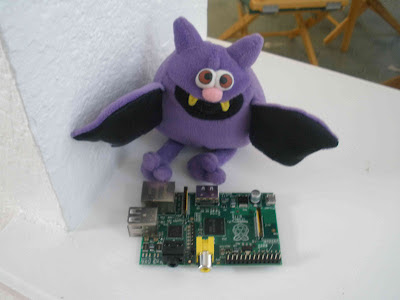 Having previously seen how unsuitable the KX3 currently was for WSPR and QRSS modes I was interested to see how my equally small FT817 would perform. It is fitted with the factory standard crystal oscillator (not the TCXO-9 option). I found the audio cables and the isolation transformer box and it still seemed to work in digimodes.

Last night I ran it as WW2R on 30m into my alpha Delta DX-EE antenna (sloping NE) at 20'.  As a comparison I also ran the ARDMEPT as N4FRE on the Butternut HF6V Vertical. Both rigs produce 250mW and both transmit evey 10 minutes. Using the W4HBK grabber to monitor the signals 1000km away over a 4 hour period and I saw the following result:- 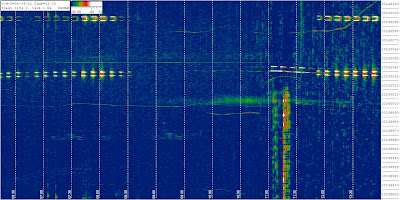 The upper signal (~10140080Hz ) is the GPS locked N4FRE. The lower signal is the WW2R FT817 signal (~10140030Hz).  As can be seen the FT817 frequency stability is acceptable for this mode. It is also interesting to see how the path fades out overnight.
Now I have another compact way to get a signal out on QRSS,  although unlike the KX3 it will need an external ATU.

Just had a visit from Charlie G3WDG who was in Dallas on business. He also delivered my 9cm EME QSL card!

I had mentioned the £13 dongle to him at the EME conference so we talked at how to install it. While browsing the web for the drivers I discovered a page at osmocon (scroll down) which lists software that utilises the output from the dongle to decode various modes. The majority are not windows based so I decided now was the time to investigate "computers: the dark side" ie make a Linux machine. As Raspberry PI were now becoming available at respectable delivery time to order one!.

While discussing other matters with Doug G4DZU on skype,  who i know is a Linux user, he pointed me at an "idiots guide" article on using the dongle with a linux machine  He also pointed out that my Atom 945 M.B. which has now been replaced by the faster Atom 525 M.B. may be usable as a Linux machine.  I did hook the dongle to my ADSB antenna and succesfully saw planes approaching DFW so I know that bit works!

Talking of ADSB I already had a beaglebone board  bought in antipation of DL4MEAs Radarcape board that will turn it into an ADSB decoder (yes it is a Linux machine  but i was told Radarcape would be easy to install!) but in the meantime its time to try and make it flash an LED!

I also noticed software to turn the dongle into a GPS receiver. I know it wont be as cheap as  a $10 surplus motorola Oncore module but it will be fun