WSJT on the RPI/Lapdock under Raspian revisited

While comissioning the Atrix Lapdock I needed to install WSJT. I had similar issues with the version currently at the trunk of the svn not installing properly, There were no clues on the SVN as to what the latest stable release was so I found out what version I had previously used (2589)and installed that as follows:-

it did a whole load of things starting at "Compiling wsjt" and ended with "Installing into: /usr/local"

after it finishes make sure you have permissions to execute  ../trunk/wsjt.py:-

Even though the serial port isnt used, WSJT still tries to talk to it so make sure /dev/ttyAMA0 permissions are set appropriately
to launch WSJT:-

WSPR on the RPI/Lapdock under Raspian Revisited

2012-12-16-wheezy-raspbian so that was downloaded and installed. At installation time I took the opportunity to overclock the board at 1GHz and in the same menu allow the memory space to fill ALL the memory card (if you dont,  you only have 2GB to use, even on a 16GB card!

Although the RPI is small, by the time keyboard, mouse and HDMI display has been added its quite a big setup

Searching the internet I found information http://kimondo.co.uk/raspberry-pi-modmypi-case-motorola-atrix-lapdock-raspberry-pi-laptop/  on how to use a Motorola Atrix Lapdock as a display/keyboard/display for the RPI. They were originally intended as a "docking station" for the Motorola Atrix Android phone and cost around $250. They never really caught on,  so they are available on the internet for a greatly reduced price, I paid $50 (shipped) for mine.

3 cable systems are needed for the RPI:- USB, Power and HDMI

I managed to source a female to female micro HDMI adaptor and a short MALE micro HDMI to MALE regular HDMI  connector that plugs into the RPI. HDMI socket

I then assembled the power cable harness. I used another FEMALE  micro  USB to USB cable and spliced into it a MALE micro USB  connector cable that plugs into the RPI power connector

All was all connected together, an SD card with the latest debian release was inserted,  the Lapdock saw the HDMI activity and the display showed the RPI boot sequence. Success!

When finished booting, I then plugged in the USB wifi adaptor that normally fits into the RPI into the USB connector on the back of the Lapdock. and rebooted. It connected fine to my Wifi so we were in business 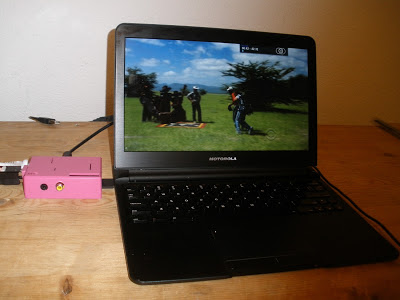 I then  looked at tidying up the cables. Accidentally I found out that if a micro female USB connected to the lapdock was connected directly to the regular sized USB port on the RPI the RPI was powered up AND it still saw the USB wifi dongle on the Lapdock 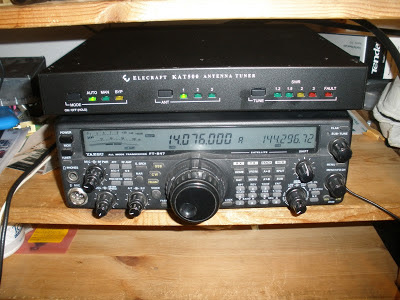 Thanks to W5LUA I got to borrow his FT847 to try out the KAT500 with 100W drive. The FT847 cannot provide band data for the KAT500 but as it measures the incoming RF frequency it should be able to work out what band the FT847 is transmitting on

The ATU is quite noisy while tuning as relays are switched in and out. Tuning is normally achieved in under 5 seconds

The ATU needed around 9W for it to reliably autotune.
Posted by g4fre at 02:00 No comments: 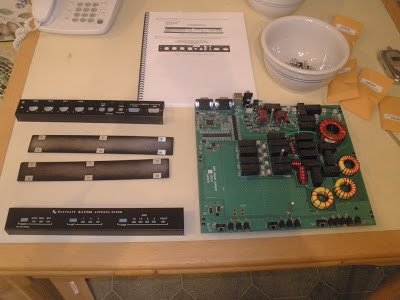 Finally got round to building the KAT500 I ordered last May, delivered at the end of December

Basically it took an hour to bolt it together, with no real issues
Just need to find an exciter that gives more than 10W to try it out.

Before returning the power attenuator to G4BVY I looked round the shack to see if anything else needed testing. Eyes fell upon the Dentron MLA2500. This was bought at a Weatherford hamfest for the sum of $100 and was restored as described at http://g4fre.com/mla2500b.htm  It was brought as checked baggage from the USA in mid2007 but has not been used since. It was turned on and left with heaters only for an hour. Then the EHT was turned on without incident. Trying it on 40m, but not pushing it too hard 60W in produced 700W of output, on 15m similar results. It still seems to work!
Posted by g4fre at 17:06 No comments:

I had a brief  listen on new years day on the new 477kHz band and heard M0BMU, G0MRF, on cw  but last night I decided to see what else i could find

The first couple of decodes took me by surprise:-

Leaving it running for another hour the following new stations were identified:-

PA0A was still there this morning:-


Time to think about a real antenna for reception.

First up was my Elecraft KPA500. It still had the old V1.11 software so this was upgraded to 2.23. It was then tested out and worked fine, a good tryout in preparation for this weekends ARRL RTTY contest

Next up was the 70MHz amplifier. Previously I had acquired a DEMI 48V 50MHz 300W PA. As the KPA500 gives me 500w on 6m it was decided to put it on 4m. Steve told me the only thing that would need changing is the low pass filter. Looking in the junkbox and finding some UNELCO caps and some 2mm silver plated wire one was built and installed. 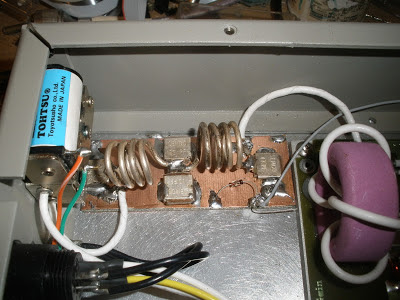 Next a 48V power supply was needed. I had bought an Erskine one from Jim GI1CET on ebay (I first saw them when he had them at the EME2012 conference but was too late to get one) Unfortunately it produced 54V, bit high for the amplifier. Using the instructions provided,  the cover and sisterboard were removed and a 220k resistor put in parallel with the 22k resistor to the right of the voltage set pot. This gave me the 47-50V range which was ideal

Hooking up the PA to the output of the DEMI 70MHz xverter (configured so that whatever i did it could only run 10W maximum, rather than its normal 35W) 8W gave me 370W on 4m . A quick test showed that it still gave 400W  on 6m for 6W of drive, both of which were acceptable