Enthused about 4m from previous outings we decided to visit British (IO81KR) again. We were late starting by 30 minutes by eating cake and coffee before departing to the site!. There was mist/rain/drizzle for the whole contest. Again we used the K3S and the Anglian transverter to drive the I0JXX dualband amplifier. The antenna was the 5 ele Powabeam at 6m, 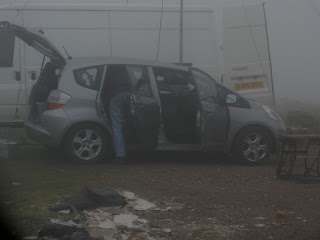 The only equipment issue was computer related. The K3S just has one USB connection to the computer (no audio leads). For the first 30 minutes on every speech peak the virtual serial port and the K3S soundcards would be removed from the computer and reappear on receive. After a while there was a warning that the device was disabled as it was unstable. Not having had this issue on previous 4m events I took a look at the USB lead. I had taken the first one from the bag; a thin black lead. Looking further I found a thicker lead with clear cover that showed a decent braid. Changing to that cable, the issue went away!
In a change to  normal, there were numerous stations QRV up north, in IO84 and 94. This activity allowed us to confirm that the site is good to the North, we dont normally work much up there as there is no activity! The loudest signal was from GM4ZUK/P in IO86. Although two stations were worked in GU, there was not even a hint of a GJ station or GD. Being called by GI4OPH in the last hour was a welcome surprise/ 98 QSOs were had with the best DX being PA4VHF in JO32 at 640km 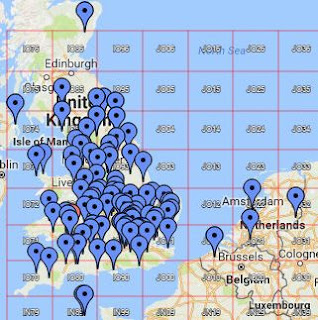