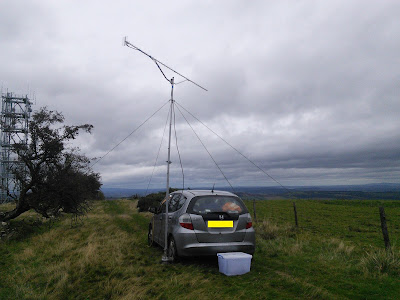 Having been to Dorstone two weeks previously for the UKAC with poor results to the North, I wondered whether it was conditions or if there was not just enough time to set up skeds on ON4KST. to work them.  Six hours of operation in the 1296MHz should provide an answer, especially as for the first time i could use the SCC M2I.

As there are no power classes in this contest the full 350W from the 4 x MRF286 amplifier could be deployed (as opposed to the 2 x mrf9060 in the UKAC) to the 44 ele Wimo. 48QSOS were made  with the best DX being DK2MN at 684km Some other noteable dx was PI4GN, PA0S, OT5A/P GD8EXI, GU6EFB and GI6ATZ. The only failure was with G4ALY who by the time i found him on CW my keying paddle springs had fallen apart. The only escapee on ON4KST was G8PNN, who admitted at the RSGB convention had been replying to M21 not M2I 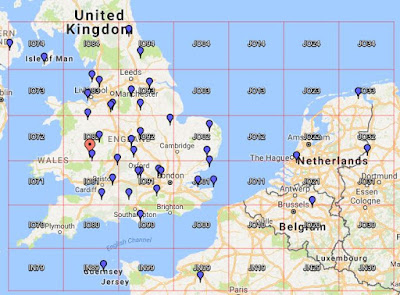 The conclusion of the operation was that with the extra time some of the weaker northern stations were workable, the site was alright

Things got so quiet towards the end i spent the last hour trying to receive the GB3ZZ DATV repeater. The 46km proved not possible (and having plotted the path on my return home I can see why!)

I also took along the 13cm system with the KX3 which although it could receive beacons produced no power, which turned out to be the KX3 not being able to produce sufficient voltage (~3.5V) on the antenna connector to switch the DEMI TCK IF interface to get the transverter to transmit. After the contest this was resolved by removing R12, replacing R11 with a 100k resistor and changing Q1 to a 2N7000