While using my SEC1223 Power supply to resurrect my Drake TR7 PA It suddenly started producing less output and tripping Amplifier alarms. To check the PSU wasnt current limiting I swapped to mydel 30A PSU and it behaved normally. I then reverted back to the SEC1223 and again the amp misbehaved maxing out at 20W. I then noticed that at this power the amplifier volts display was down to 7.2V when the current was 7A. Obviously the SEC1223 was ill

Searching the internet it appeared the most common cause of demise was the output capacitors failing, so I took the cover off 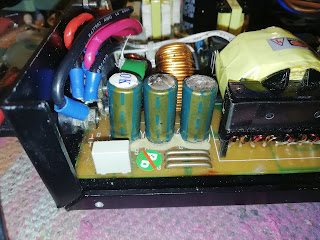 Indeed two of the three output capacitors had black goop on the top and were bulging. The capacitors are 16mm diameter and 29mm tall. I searched for replacements at the usual suppliers but did not find anything. Then I did an ebay search and found identical capacitors Teapo 2200uF 25V at £4 for 10 units so I got them. When they arrived they did look the same so I started swapping them:-
1. Remove the Mains connector and wires
2. Remove the 4 screws under the chassis holding the fan in place
3. Remove the 2 black screws under the chassis holding the internal heat spreader in place. This saves risking damaging the 3 active devices taking them off the heatsink
4. Remove the 4 screws holding the PCB in place.
It was then possible to manouver the PCB to get under the old capacitors off the board. Two of them had put black goop on the PCB that was cleaned off, but all three were replaced
After reassembly the psu produced 13.8V and using the K3S producing 100w output, the PSU only showed a drop of 0.3V at 20A output. Repair finished
I will be taking a look at my other two SEC1223 to see if they have capacitors about to fail