First thoughts went to flashing the onboard EMMC on the BBB board with Ubuntu and running it from there. I  found a suitable image https://rcn-ee.net/deb/flasher/raring/BBB-eMMC-flasher-ubuntu-13.04-2013-09-27.img.xz downloaded it and put it on an 8GB microsd card. Put it into the BBB slot and power it up while holding down the boot switch (the near the hdmi connector) till the blue lights start flashing. Then wait. When complete all 4 blue LED will come on and stay on
Remove the microsd card and reboot. The BBB will start running Ubuntu. At this point I  had to edit /etc/networks/interfaces to set up my static IP for the home network. I could then do

Went away, when I came back 2 hours later there was an out of disk space message. The 1.9GB of EMMC was not enough!

I reverted back to debian by flashing the eMMC with the image "BBB-eMMC-flasher-2013.06.20.img.xz" from http://beagleboard.org/latest-images. This was put on an microSD card and the BBB powered up with the boot button pressed. Wait till all 4 LEDS are on to show it is finished. Note you cannot flash EMMC if you are running the OS on the EMMC.

I decided to use 12.04 LTS as it was more mature. I downloaded ubuntu-precise-12.04.2-armhf-3.8.13-bone20.img.xz from http://www.armhf.com/index.php/boards/beaglebone-black/#precise unzipped it and wrote the image to an 8GB microsd card using win32diskimager programme on my windows machine

The microsd booted and gave me the ubuntu 12.04 welcome and login prompt. I expanded the file system using the instructions at http://www.armhf.com/index.php/expanding-linux-partitions-part-2-of-2/ to maximise the space available for the desktop. another

and off it went installing again.  Four hours later I came back and saw the install was finished and rebooted the BBB and automatically displayed the familiar Ubuntu desktop with no flickering or Instability. Success at last!


I spent some time looking for a cheap antenna for portable expeditions. The wire in the tree is OK but not repeatable. Looked at the buddipole but that needed a support mast and $250.

A while ago I built my Version of the NJQRP PAC-12 antenna which was now in England. Decided It was time to build another one

Most of the items needed were available by walking to the local hardware store and Radioshack. The whip section was the one I got from Buddipole, strengthened with the ferrules I bought from them at Hamcom

I made a couple of alterations to the original design, mainly in the way of interfacing the UHF connector to the antenna using an electrical conduit boxes.

Full details of how i built this one will be on my web page shortly. The parts including a new whip cost $45

Looking through the parts box I came across the Airlink Communications  CDMA C3310 vehicle tracker bought for $1 which was used to provide position updates derived from GPS over the CDMA Phone network and had supposedly a GPS receiver. Time to investigate

In true ham spirit the covers were  removed first.After I opened the box I found a Verizon CDMA phone module and a GPS. On the back panel was a 9 pin RS232 serial connector a connector for GPS antenna an antenna connector for a CDMA antenna and a 12V power connector. I hooked up a computer to the serial port an active GPS antenna to the GPS port and 12V to the power conenctor and waited. Nothing came out of the serial port, however after a while the GPS lock LED on the front panel did illuminate. Time for a web search. 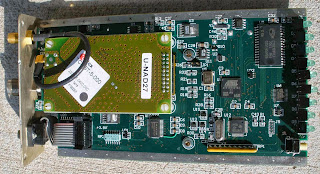 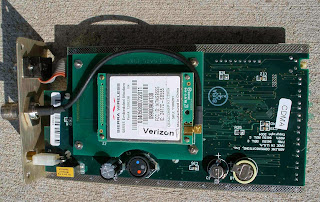 Luckily I came across a document on the unit which I have put on my web site.  raven-cdma-airlink_document.pdf  From this I learnt that by connecting a terminal emulator to the serial port at 1152000 baud and issuing an ATGPS1 command I could get GGA RMC and VTC NMEA strings out of the unit every second. Unfortunately I could not find a way of making the unit remember that setting when it was power cycled. I searched with a logic analyser but could not see a 1PPS signal which was not surprising as the application does not require accurate timing

I think with a tweak to my GPS LED clock code, originally designed for Motorola GPS boards I could turn it into a GPS clock, so the $1 is not wasted. 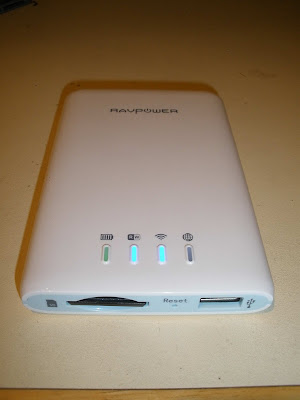 I have been looking at ways to extend the memory on my 16GB Ipad. Cloud storage is all well and good if you can see the cloud, on a lot of occasions I cannot.

Searching the internet I came across a RAYPOWER Wifidisk. Title is a bit misleading as it doesnt actually have any storage space onboard.  It is about the size of a 2.5" external hard drive case. which is good considering it has an onboard 3AH battery that can be used to power the device and if needed the IPAD.

It can be used as a private WIFI network but can be used, at the same time as a WIFI Hotspot to connect via your wifi router to the internet. It has a socket for an SD/SDHC memory card that fits flush to the case (unlike the RPI) and a USB 2.0 socket into which a USB memory stick or USB hard drive can be plugged in. A microusb socket is provided for external power

Searching EBAY I found one for $44 shipped. I also ordered a 64GB SD card on ebay from
sirdouglash. The WIFISD Unit arrived and powered up fine but when the SD card arrived it proclaimed it was a 1MB card despite my best efforts to persuade it otherwise. The seller refunded the cost of the card but wasted a week of my time.

There is a windows utility that can be used to set up the unit called Mobilefun. I installed it and connected the unit via the USB cable to the computer and set up name password and how to connect to the Internet via my WIFI Router, I also installed some MPG4 and .wav files to test streaming

I installed the free Airstor app on the Ipad and directed the IPAD to connect to the WIFISD device shown in my available wifi signals. Doing this allowed me to play audio and video files and I could still connect to the Internet

Next it was the turn of my Nexus 7 Android device. The Free "Airstor for Pad" app was found in the Google store and installed. I again connected to the WIFISD device shown in my available wifi signals. Doing this allowed me to play audio and video files and I could still connect to the Internet.

As  a final experiment I plugged in my 500GB hard drive into the WIFISD and managed to stream video to the ipad. Not being an SSD not sure how long the battery would last though.
Posted by g4fre at 04:43 No comments: