Having finished the 9cm  power amplifier integration I decided it was time to try it out on DATV. Noel G8GTZ pointed out that there was to be a UKUWG contest on November 17 for which he would be going out for, so I could combine the two activities. I chose to visit the usual Cleeve Common IO81XW site. Noel did suggest that the site he was going to would be workable from the Radio Mast car park, avoiding the need to cart the gear across the common to the trig point area.

Arriving at the car park at 0930 there was so much fog I could not see across the field but I set up the narrowband system to check out the receive system.


GB3ZME and GB3OHM were loud so all seemed to be working. I then worked M0HNA/P, G8CUL, G4LDR and G3VKV. Noel then arrived on site and we worked easily on 9cm narrowband. I then switched to DATV. He saw my 9cm signals easily, however due to issues at his end it took me a long time for me to receive his signal, but I eventually succeeded.

After finishing working Noel I eventually managed to attract the attention of G4ODA on ON4KST to try working him. The path didnt look too promising as shown in the following picture:- 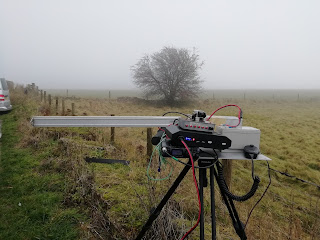 With patience e did work on cw at 160km, being my best DX. As I could find noone new to work I left the site and came home.

I even found time to put in an entry to the contest and was most surprised with the result:-