Having previously finished encapsulating my 6cm amplifier, I was eager to try for some QSOs. The UK microwave groups 5/10GHz activity contest on July 27, G4DDK had given me a 5Ghz patch antenna which would be easier to use than my 0.6m dish. I ended up packing the 5760 EME transverter, the amplifier , and the KX3. As it was a 12V system everything could be run from the car battery

As the local site at the tump at IO82UA had a good takeoff to many directions North through southwest, it made an ideal starting point; if anything didnt work I would be close to home to get it fixed

The first attempt was with GW3TKH/p operating from the Blorenge IO81LS. Signals were easily exchanged, but holding the antenna in one hand, writing the log entries and tuning the rig was quite tiring!Signals were also exchanged with GW4HQX/p at the same location

.
The next attempt was with M0HNA/p in IO91GI. He had linearity issues so no SSB, so we tried NBFM. No problems in exchanging signals, and the best DX at 94km. I next tried with G4ODA. Signals could be seen on spectran in both directions, but not loud enough for a QSO.
I wanted to try with G3XDY and G4JNT, but both were too busy setting up skeds on ON4KST. Hanging around was not possible as I needed to move to the other side of the malverns to work G3ZME/p in IO82QL before the contest ended. I left the Tump and went searching for a suitable location. I found a couple of locations but it is amazing how big the field hedges are on the west of the Malverns which precluded their use. I ended up again going to Ankerdine Hill IO82TF, where despite pointing through dense foliage a qso with G3ZME/P was completed, again handholding the patch antenna.  By this time G4JNT was free, but the Malverns caused a major path obstruction. 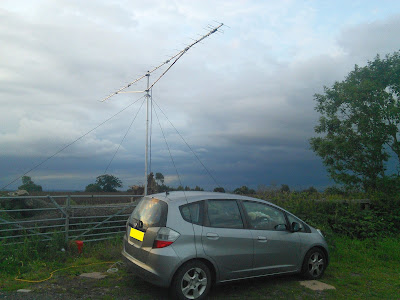 Time for the annual 432MHz UKAC outing, mainly to try out some new equipment locally before taking it further afield. The new all digital KR400 rotator needed testing, as did the recently rediscovered DEMI ex TV transponder amplifier. Both worked fine. Heavy rain delayed going to site, so only operated 2 hours. However 77 QSOS were made as G4NXO/P, best one being 390km into Paris. Equipment ran a K3S into DEMI Xverter, TV Transponder PA module running 100W into a 21 ele F9FT. The HA8ET mast head preamp was mounted at the base of the mast due to the length of feeder on the Yagi 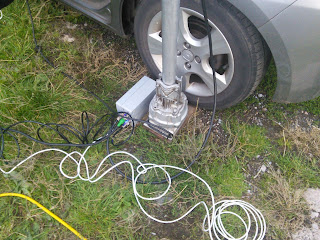