The build started at 1015am after turning on the coffee pot.

The KX3 ordered on 12/28/2011 at 10:33:00PT arrived this afternoon. I got the despatch notification 21 June saying UPS would deliver the package on 27 June. I was therefore surprised to find the package on the doorstep when I returned from the NTMS Tuesday lunchtime BBQ.

For many years now I have been using a Linksys WRT54G  802.11b/g wireless router. My IPAD supports the faster 802.11g mode which I am also going to need for remotely using my HPSDR and my Elecraft K3.

A search of the Internet revealed that Newegg had a refurnished Linksys WRT120N for $20 shipped so I ordered one. Today it arrived. It came with an installation disc, however despite many hours of attempts to get the wireless working, I could not get anywhere. Resuming the attempt after lunch, investigations showed I couldnt find my own DNS when connected wirelessly. I eventually hard wired the computer to the router, when a wizzard appeared,  after running which I could browse the internet. Reverting to WIFI I could now browse the internet and ping my DNS. Most strange

Having gone through this the good news is that the WIFI speed has indeed increased, so the effort was worthwhile.

I have been using 13cm EME over the weekend. Having sold the FT847 I no longer have the ability to receive on 2320MHz so all activity for the moment has to be on 2304MHz. On Saturday, Sunday and Monday I had skeds with SM3BYA. After struggling on the first 2 days success was easily had on Monday.   I also worked WA9FWD on CW and had a two way SSB QSO with LX1DB

I ordered a Pigtail MK1 fom pignology.net kit with the matching case on the Saturday afternoon of Hamcom. It arrived today. It took under an hour to build and configuration was easy by following the instructions

As the KX3 hasnt arrived I used it and the IPAD Hamlog app to control my FT-817 from around the house. I can see lots of uses for it.
Posted by g4fre at 04:08 No comments:

Just returned from the annual Hamcom Hamfest which was held in Plano, Texas.  As usual it was hot and clashed with the ARRL 50MHz to Light Contest

Elecraft were in attendance showing the recently released KX3 transceiver. They were currently still sending out kit radios ordered on the day that orders started being taken. Unfortunately mine was ordered on the 2nd day!

One interesting demonstration was using the I/Q data supplied by the KX3 to drive an IPAD to produce a panadaptor display using the ISDR app. As the 3.5mm audio input to an IPAD is mono and the I/Q requires a stereo input it cannot be used. This was overcome by using the I-MIC interface connected to the IPADs 30 pin connector via the IPADs USB camera adaptor

Unfortunately the ISDR software doesnt track the mode and frequency that the KX3 is tuned to.  However there is an app called HAMLOG which can track the frequency, but it currently doesnt interface to ISDR. The issue of how to connect the RS232 output from the KX3 to the IPAD which doesnt have an RS232 connector is solved by a device called a Pigtail available from Pignology LLC. This is an RS232 to WIFI converter which allows the IPAD to see the KX3 device. All I need now is the KX3 to arrive to try it out!

I also got to see the new Elecraft KAT500 500W Auto ATU which was smaller than I visualised. It only has the same footprint as the K3. It will be available from August.

I did finally give in and ordered the RemoterigII pair to allow me to remotely control one K3 with another K3 over the Internet without a computer. Sufficient RJ45 cables were found at the Hamfest to make the necessary interface cables.

To help the construction of a 472kHz bandpass filter for my 10MHz to 472kHz Transverter the opportunity was taken to stock up on a range of silver mica capacitors  on one of the outside stalls. The only other purchases were a speaker/mic for my IPAQ and an active GPS antenna for $5 each 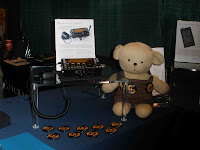 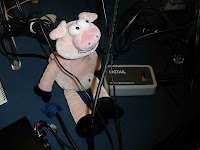 I bought my FT-817 shortly after it was launched. It was supplied with a ferrite choke from Yaesu  to fix on the DC power lead to solve instability on 440MHz. This worked fine but I have noticed that mine has a tendency to produce full output on 144MHz when switched to SSB and not speaking suggesting PA instability.

Today I did a search on "FT-817 Instability" and came across a post by KC3VO from 2003 describing a modification to stabilise the FT-817 PA. It looked easy to implement as it basically involved swapping over the centre and braid wires of the input coax to the FT-817 PA module. Ten minutes later the mod was done. Testing it out I could not provoke the same reaction on 144MHz. Problem solved!