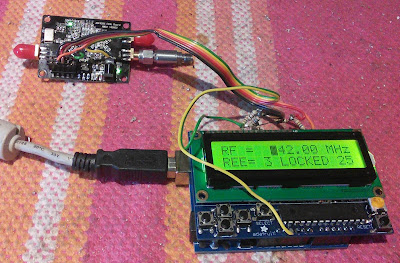 My previous attempt at building a 35MHz to 4.4GHz signal generator here had been thwarted by  a fake chinese chip recorded  here. From consumer feedback it appeared that much less trouble was being had with the black ADF4351 chinese board with the 2x5 pin header. I also noticed that BATC were using one in their Portdsown DATV Transmitter. So I bought one from "alicehappy858" on ebay

It took 15 days to arrive, and ten minutes to rewire the header. One very important point to note is that the header pin marked "3.3V" is a 3.3V OUTPUT from  from the 3.3V onboard regulator, NOT a 3.3V INPUT.  5-9V needs to be applied through the tiny barrel connector on the edge of the board of the black version.

Having taken care of that issue I again used my modified F1CJN software published here , modified to use the Adafruit RGBLCD shield that I had. The unit locked all the way from 35MHz to 4.4GHz and the Frequency counter agreed. Success at last!
Posted by g4fre at 13:29 No comments: