June brings the annual Hamcom hamfest to Dallas, which, as always clashed with the ARRL June VHF contest.

As in the last four years I volunteered to help man the Elecraft Booth, this year with Eric WA6HHQ and wife Lerma. Their plane got diverted from DFW to AUS as DFW closed for an hour due to bad weather so we didn't start setting up till 5pm Wednesday.

The trade show exhibitors this year started earlier at 0800 and officially closed at 1800, making a long day. The new item this year was the PX3 Panadaptor for the KX3. 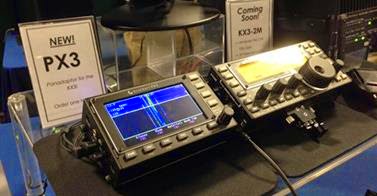 The K3/0 mini was also in evidence, this time using the software from remotehams.com, to control a K3/KAT500/KPA500 in California. It was great fun on the Saturday afternoon listening to the 6m activity in California during the VHF contest.
The outside flea market was not too exciting. The most interesting item was a Layafette tube tester without model number which I bought for $15, I was told that Lafayette often rebadged other companies products. 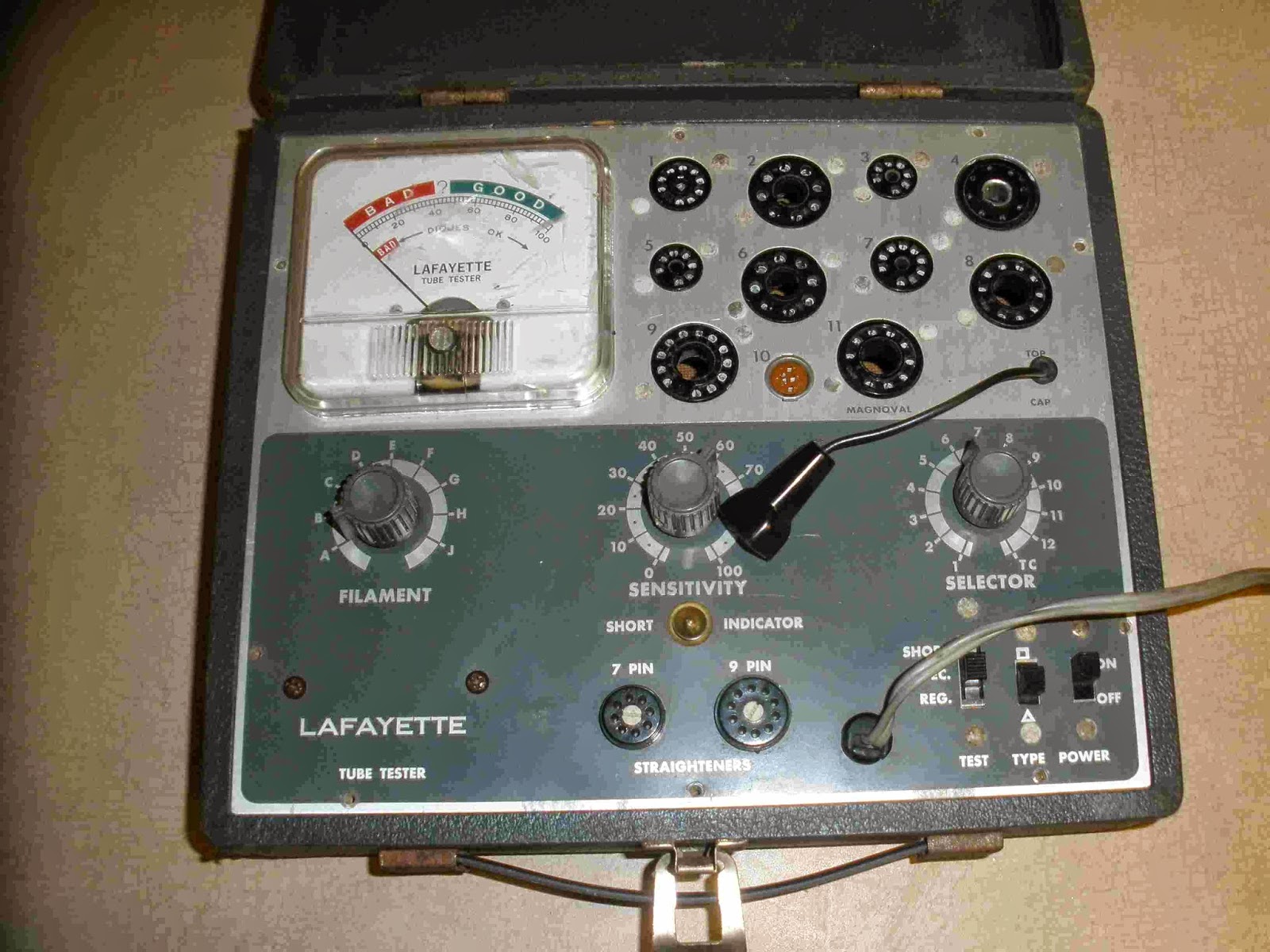 I also got some tube bases, some tubes for my BBC studio-E receiver and a multiband whip for the 2m module

I did get to meet John Langridge. KB5NJD who also operates on LF as WG2XIQ and compare notes from WH2XES. Unfortunately I could not get to his talk on reusing "normal" HF antennas on 477kHz.

UPDATE: The Lafayette tube tester is a Accurate Instruments model 157 in disguise
Posted by g4fre at 14:29 No comments:

DrugStore Tube tester...every shack should have one! 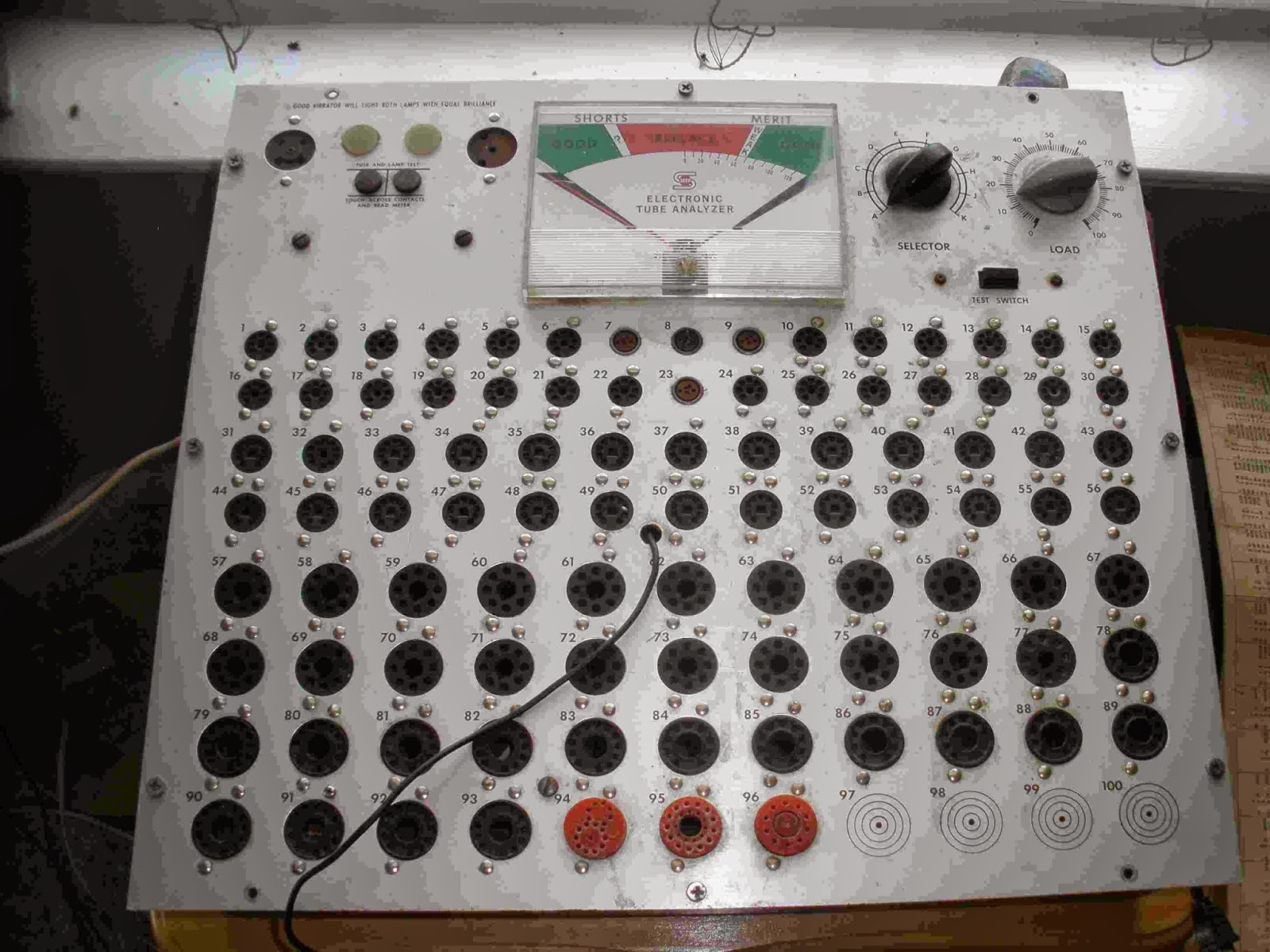 To help me restore the Country Belle radio I wanted to test the tubes.  I mentioned this to Roger at the NTMS Tuesday BBQ meeting. At the next meeting he appeared with a loaner tube tester in the back of his truck. This was a "Seco Electronic Tube Analyser"  It was the type often seen in your local USA drugstore in the tube era so you could test the iffy tubes in your radio receiver and they would sell you a replacement. This one had been previously built into a panel but was now mounted on a undersized box.

It has a meter, switch,  variable load resistor and 92 sockets. It came with a manual of what settings to use for each tube.

All the tubes in the country Belle radio passed with flying colours. along with some other 1930 era tubes I had acquired for future projects.

I had been looking for a 6AF11 audion multistage tube for a while. WA5VJB found me one in the Dayton Hamvention fleamarket. The manual had 3 settings for the tube so decided to test it. Two settings produced good pass results of 120 but the third only produced 20, a big fail. Pity! I then remembered that Roger had mentioned the tube tester can be used as a reconditioner by leaving the tube in its test configuration overnight. Worth a try. The next morning the reading was 100, so I let it be for the rest of the day which restored it to a 120 reading. What a great tool, even if it is so large! I will be looking for a transportable tester.
Posted by g4fre at 23:40 No comments:

Having built a couple of one Tube receivers, a local amateur decided it was time for me to move on to a restoration project. As a challenge he presented me a while ago with his spare Country Belle Radio #556  made by Guild in 1958 (the metal chassis is stamped 6 jun 1958). This radio was made to look like the old style wall Telephone, but had a 5 tube medium wave receiver Inside. Taking the earpiece of its rest turns the radio on. The Winding crank is the tuning knob, very neat. It had some hardware missing (a bell, the tuning crank and the earpiece rest) but was electrically complete.
The Tubes lineup is the classic "all American Five".  Converter: 12BE6, IF amplifier: 12BA6, Detector: first audio amplifier: 12AV6, Audio power output: 50C5, Rectifier: 35W4. The subtlety of this lineup is that the filament Voltage/Current all add up so you just connect them all in series across the 110V AC (or DC) supply. The 35W4 even has a tap on the filament to drive a dial light (#47)
As the radio is transformerless,  for safety I borrowed an Isolation transformer from WA5VJB. When power was applied, all the heaters lit up, there was some noise but no stations could be tuned in. Tracing the circuitry I found that the grid Transformer of the 12BA6 was open circuit. The Inductor was taken apart and the wire mended. Now when powered up stations were loud and clear. I peaked up the 455kHz IF Transformers, noting that each transformer had an upper AND a lower tuning core. Note that the radio has an internal ferrite rod antenna, making the receiver directive. The short piece of wire(by medium wave standards) doesnt do much to increase sensitivity
Next task was the Hardware. Luckily a friend of a friend had a #556 carcass in their barn which I was given. The wood work was bad but it had all the missing hardware.
The next decision was what do about the woodwork. Sand it down and repaint or leave it in its current patina state. In the end I decided to sand down all the wood parts (after stripping the fittings) but this also removed the Decals. I then sprayed it with Pecan wood stain/Varnish (3 coats). The Brass fittings were cleaned with Brasso (which I discovered is sold in the USA) then varnished. It was recommended to spray the other black metal fittings with Black Lacquer, but using it can be challenging. I went to the local O'Reilly's autoparts store to get some but after explaining what I wanted it for to the Old Guy, he said not to use it but to use Black "Dupli-color Vinyl and Fabric Coating" as It would flake less. This has really worked well
I found a source of replacement decals at radiodaze.com These were water based transfers (like I used many years ago for Airfix model aeroplanes) which were a little tricky to apply, but I managed it. When dry the cabinet was sprayed with Varnish
When completely reassembled,  the radio worked fine and looked very nice, even though I say it myself!
﻿﻿
﻿﻿
﻿﻿
﻿
Posted by g4fre at 23:37 No comments:

Before Christmas I saw a posting for NavSpark on the crowd funding site indiegogo.com.  From the web page https://www.indiegogo.com/projects/navspark-arduino-compatible-with-gps-gnss-receiver  "NavSpark is a small, powerful, breadboard-friendly, 32bit development board that is Arduino compatible, with a world class GPS receiver as on-board peripheral, and under $15".  At that price I ordered one, especially as it came with a dual band patch antenna for $19.
It arrived last week, the board looking like an Arduino micro with the dual band active antenna.  Heeding the warning that the U-FL connector can only be used a dozen or so times, I mounted the Board and antenna in a plastic box. 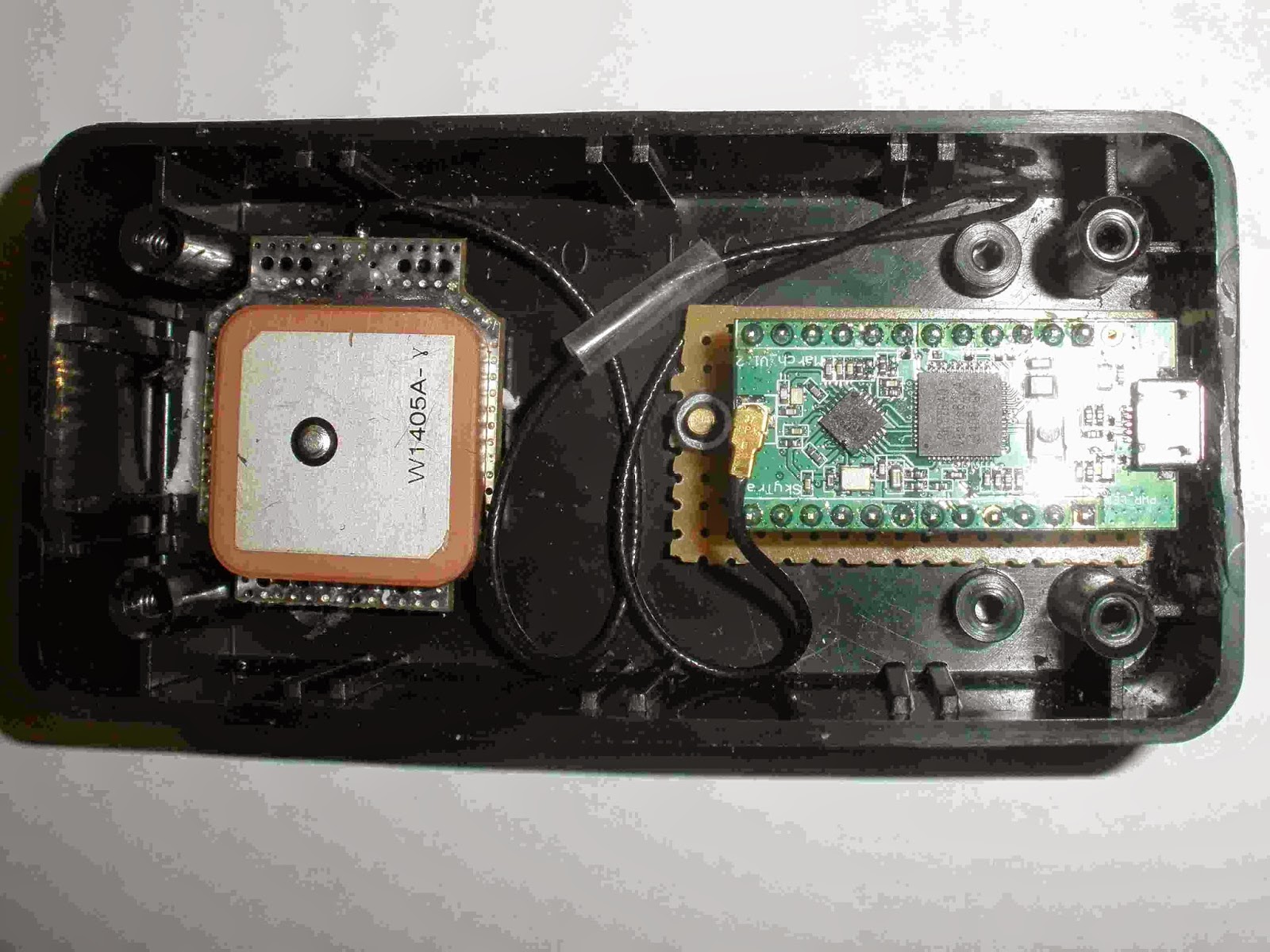 The Arduino IDE, viewing software programming guide and documentation are all at http://navspark.mybigcommerce.com/resources/    The USB chip is by Prologix, the unit appearing as a serial port (defaults to 115200Baud). After installing the drivers and software and putting the receiver out on my south facing balcony, it found GPS and GLONASS satelites 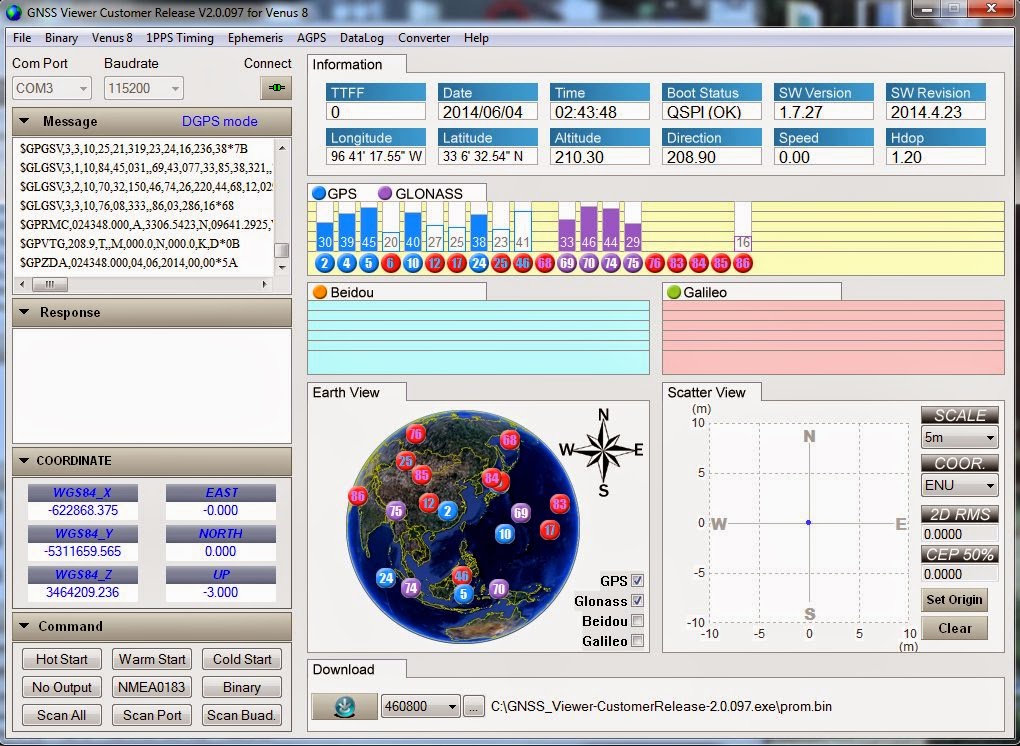 The map shows the correct relative position of the satellites, but the map is based on Taiwan (where the units are made) and isn't currently changeable. Not surprising the locked satellites are all to the South with the system on a south facing balcony.

Having bought a cheap ($20) Chinese reflection bridge off the internet (NOT ebay) which had appalling directivity (10dB), I decided it was time to build my own to be used with my HPSDR VNA.
A survey of the internet and some recommendations pointed me at the designs by Sam Wetterlin. There were two possible designs, I chose the three bead balun version (mainly on size grounds) This used a Minicircuits transformer and a ferrite bead Balun. I bought some "TC1-1-13" off ebay but these had a pinout different from the Minicircuits catalogue and didn't work well. N1JEZ provided a couple of the genuine articles from his collection which worked perfectly The rest of the parts were bought from Mouser and I designed the two tiny PCB with 0805 components and had them made by ExpressPCB
Assembly took five minutes. The two PCB are separated by a brass strip which supports the balun.  I had some Glass fibre tape which I used to stop the Balun moving around on the support. I soldered an smt resistor to the PCB as the reference load to save using a 4th SMA for an "external load.
Posted by g4fre at 03:10 No comments:

Last year I built the TF3LJ Power meter and subsequently gathered the parts to build his Power and SWR meter.  It was time to finish the project.
The first consideration was the directional coupler. I remembered I had built one for the ill fated W7IEV project so this was unpacked. The basic unit is rated at 100W and has -40dB coupling for both forward and reverse signals. I found the fixed 20dB BNC attenuators bought for the W7IEV project so that would give -60dB for both forward and reverse signals.
I also found the two AD8307 detector boards from the W7IEV project so all I needed was to mount the Teensy 2++ arduino style module on a carrier board and was ready to go.
I mounted the modules and an LCD in a 8"x6" x 3"  Box. Probably would have gone in a smaller one but it was available. The software was installed from Lofturs Site and all worked smoothly.
The software does have the ability to produce an alarm signal when a preset SWR is exceeded. This could be used to Inhibit an amplifier. It is the phono connector on the back panel below.
Posted by g4fre at 14:42 No comments: