Having used the PortsLang 4 for a while I decided it needed 3 main improvements:-

1. The mouse for tuning works ok but is a bit clumsy and occasionally misses pulses

Fitting am Arduino Pro micro board emulating a USB mouse s described  at   https://wiki.microwavers.org.uk/Langstone_Project  with an Optically coupled encoder fixed this issue in my Langstone so the technique would be used again, There is not enough room for a turning knob on the Front panel. An external solution would have to be used.. The mouse simulator was built with 3 switches an an optical encoder in a small diecast box, allowing it to be plugged into the back panel of the PortsLang 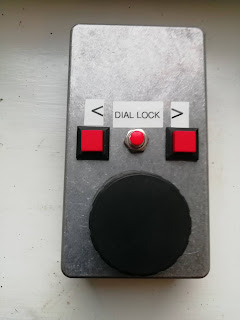 2. The Adalm Pluto Oscillator drifts and has a frequency offset

This is not an issue in my Langstone as it has enough room to put a good oscillator and multiplier in the box.  There isnt enough room in the PortsLang to do that. Measuring the output frequency of the PortsLang showed the oscillator settled down 33kHz high at 437 MHz which was unacceptable. I had previously bought a couple of  the recommended replacement 49 MHz oscillators from Mouser, so decided to swap it out. The existing oscillator was carefully removed from the PCB with two soldering irons and the new oscillator soldered in place . Unfortunately when removing the original oscillator solder flicked onto the oscillator coutput capacitor and whilst removing this solder the capacitor vanished. A new 18pF 0402 capacitor , While I had the board out I also added the PTT output relay described at https://wiki.batc.org.uk/Custom_DATV_Firmware_for_the_Pluto#PTT_output

Measurements now showed the oscillator was now within 200 Hz at 437MHz without tweaking the Pluto calibration.

3. It has no speaker so a headset HAS to be used to listen

I had built a speaker into my Langstone so I could hear the signals when peaking a dish without tripping up on the headset lead. There was not enough room for a speaker in the PortsLang so an external box  was needed. Looking in my Junkbox I found a 12V 18W audio amp module, volume control,  a 2" speaker and a suitable plastic box, I built the amplified speaker with a DC connector to allow it to be powered from a 12V output from the PortsLang

Upgrading my Portsdown 4 to become a PortsLang 4 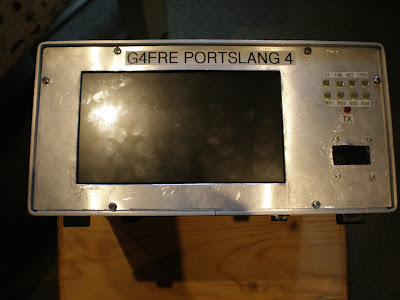 Inspired by a post by G8GKQ about new features available in the latest Portdown software release I decided it was time to upgrade my Portsdown 4 to enable it to be used as a Langstone on Narrowband modes, saving an extra box when man portable. The main change is the SDR is changed from the LimeSDR to an Adalm Pluto SDR. Looking at the benefits of the change revealed the only feature I would lose would be the Lime spectrum view which is not available on the pluto

I did have a spare Adalm Pluto obtained secondhand from HRD. but it was still in its plastic case. First task was to house it in a metal box which was much easier the second time around. Fitting it inside the Portsdown necessitated moving the antennuator board 1cm towards the front panel, which took much longer.

The Langstone mode requires a "USB mouse" tuning knob and a USB sound card which would require additional USB ports (the RPI4 only has 4). I dug out the old USB3 powered hub and refitted it. I also found a dual port USB extension cable that allowed two of the ports on the hub to be accessed on the Portsdown rear panel.

The USB soundcard required fitting two 3.5mm stereo sockets for mic and phones to the rear panel to allow external access for a boom headset/microphone. A phono soocket was also added for a footswitch input to put the Langstone on transmit. The audio connector for the RPI audio output was kept.  All these additions made the portsdown rear panel crowded!