Replacing the USB Connector on a Nexus 7 (2013 version)

Getting the charging cable to actually charge my Nexus 7 (2013 model) has been becoming Increasingly difficult. Having to balance the unit on a coffee jar and hang a weight off the USB connector at exactly the right point was a challenge. Searching the Internet I am not the only one to experience this issue. The recommended solution was to change the connector, as it becomes sloppy over time. I managed to find a connector for 1.49 off Ebay. Note the connector on the 2013 version is very different from the 2012 Version.

Guided by a Utube video I managed to get the Tablet apart, at a cost of broken finger nails, revealing the Innards.. 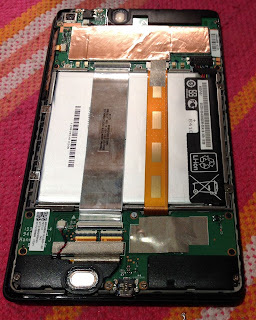 The USB connector is on the lower edge. To remove the connector, first, using a sharp scalpel cut the 5 pins sticking out the back of the connector. If you do not,  you run the risk of lifting the tracks in further activities, The four lugs can then be desoldered and the connector removed. It is then a simple task to solder the new connector in place using a fine tipped soldering iron and thin solder. 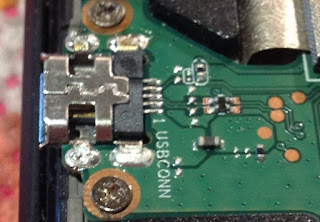 The Tablet can then be tested for correct operation before re attaching the cover. Mine charged fine and still produced video. Task completed
Posted by g4fre at 21:03 No comments: