Having tried using the Raspberry Pi for digital mode decoding and realised that lack of speed was an issue, I started looking at the beaglebone board that I was looking at for another application. Unfortunately it's biggest drawback for me was that it does not have a video output.

I was very interested to discover that there is an upcoming Beaglebone Black board which has many extra features that the beaglebone board does not have. It has :- 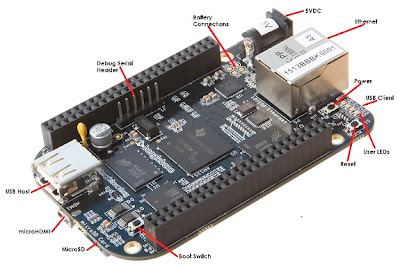 It also supports Ubuntu and Android 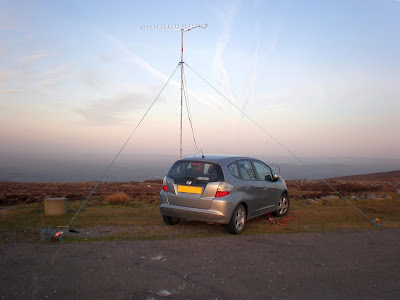 Before going to Wales to help Roger GW5NF fix his HF beam I discovered that there was a 1296MHz activity contest on April 16. I had the Elecraft K3 as a 144MHz  IF,  the DEMI Xverter and a 23 ele F9FT. All I needed was a mast that would fit in the Honda Jazz and GW4FRE/p could be QRV.

Roger dug out the multisection mast that he used on the Backpackers contest and managed to make some guy posts, the originals having gone missing and activity was possible

The Jazz had never been used portable so how to hook up the gear to the battery was a challenge. The cigar lighter fuse wasnt rated high enough. In the end a set of jump leads was connected. The battery at one end (using a rat poison tub to prop the bonnet open so the positive terminal didnt short out). The other end stopped outside the drivers door and the lead for the k3 and the transverter were connected to the croc clips, insulated with a plastic bag and lots of electrical tape. It worked well, the K3 voltmeter only dropping 0.5V with a loud whistle

As it was a nice clear night the Blorenge was visited in IO81LS. The summit has a good takeoff all around but not practical for a 2000-2230 contest so the car park was used. This is great to the East but obstructed to the North by the summit

Setting up before the contest, 5 beacons were heard, GB3MHL, GB3DUN, GB3USK GB3CLE and GB3MCB all at reasonable strength. The best DX PA0EHG at 527km was worked early on and a total of 32 stations were worked, not bad for 10W and a single antenna at 15'. It was noticable that only two stations were worked to the west, one of them only just West! 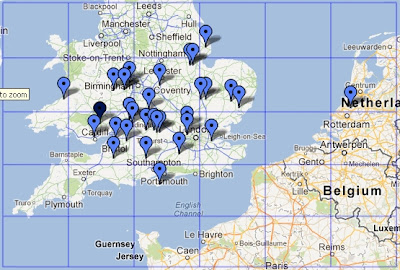 The DVR on the K3 sure earned its keep, especially in the very boring last 30 minutes when conditions had gone downhill.
Posted by g4fre at 02:35 No comments:

ANAN-10 With CUSDR, 4 receivers at once

I had previously tried the DL3HVH CuSDR 32 bit on a couple of my computers without success, mainly due to the unavailabilty of Opengl 2.0 video driversmachines

I have a fairly recent dual 2.2Ghz core processor computer which has windows 7 on it so I thought I would try it on that. It installed without incident and I was impressed by the result

The following shows a spectrum view of four bands 40, 30, 20 and 15m. Each shows 192kHz bandwidth. One band can be demodulated and heard 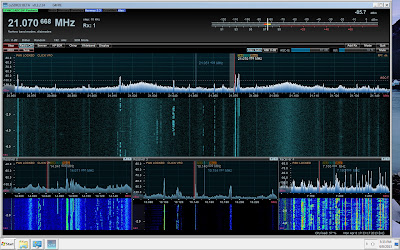