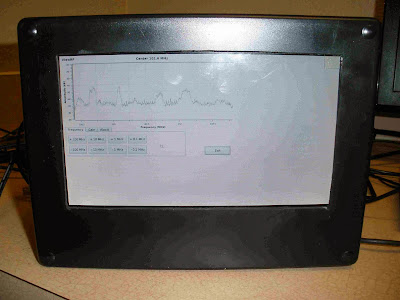 Finally got round to trying to put the 7" LCD display in a case. Went to the local Radioshack and found they had  Project Enclosures (8x6x3") as part number 270-1809 for $9. The display was mounted in the base of the unit after cutting out a hole just big enough for the display area. The interface board was mounted on the bottom wall with the connectors showing through a hole cut in the box "lid". The switch PCB was mounted on the right side wall. Currently the switches are pressed with a paperclip until i can find some real switch caps. Took about an hour with a drill and file without a vice to hold it in on the apartment balcony! Good exercise after the Thanksgiving Turkey! 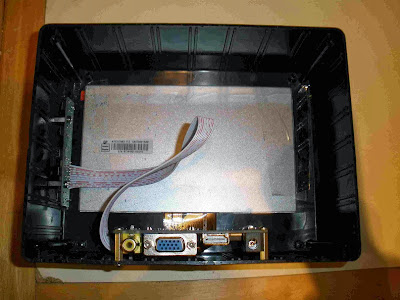 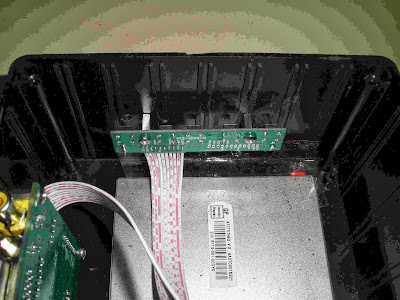 After 5 months of inactivity I decided I needed an HF antenna that fitted on the apartment Balcony which I could use on Transmit. I had looked at the Buddipole but it was too large. I saw the Alexloop a while ago which covers 7 to 30MHz, but shipping from Brazil was prohibitive. Recently it was reviewed in QST from which I learnt there were 2 USA distributers. Problem solved. I ordered the Alexloop Walkham from Gigaparts (as shipping was free) on Oct 16. Enquiring Nov1 I was told that they were on backorder but I should get it by Thanksgiving. Nov 11 I went chasing the order and was told it was delivered by UPS on Nov 12. After some detective work I discovered that it was in the Apartment complex management office, locked away securely, so I recovered it.

It came well packed in a box inside which is a laptop sized fabric case with all the parts held firmly in place. 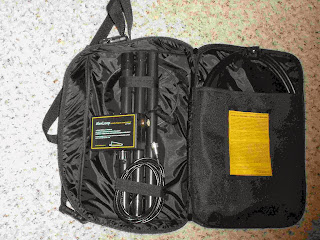 The central mast comes in 3 sections which push together. The loop is plugged into the two connectors. The coax and coupling loop are integrated into the mast. It assembled in under 2 minutes. Alex suggest standing and holding the loop, allowing ease of retuning and operating with the other hand. Didnt sound much fun to me! A visit to the local hardware store produced a length of half inch of plastic pipe which was cable tied to the balcony railings and supported the antenna:- 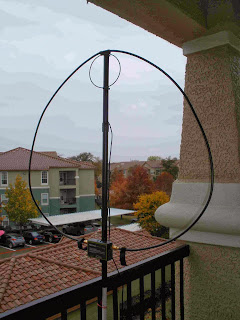 I had a listen during CQWW CW and heard lots of stations including 10m Europeans.  Changing bands is not easy, as i have to go out on the balcony and tweak the tuning capacitor while watching the swr meter 10m away. The knob is not calibrated ! The rig is fed by 10m of RG174 thin coax as it is the only cable that will fit under the balcony door jamb

Today I left it transmitting on 30m DFCW QRSS. Even at 3mW it was visible in Florida at the W4HBK grabber

The past week Dallas has been remembering the 50th Anniversary of the assasination of JF Kennedy. On Nov 22 the City of Dallas declared a holiday and there was to be a downtown Memorial. This was severely disrupted by Heavy rain and high winds, cancelling the outdoor concert

While travelling back from work Friday night I came across a replay of a piece by Walter Cronkite assembled ten years previously for the 40th anniversary on KERA 90.1MHz. Of particular interest was listening to the Air to ground Communications on HF SSB between Air Force One, the Federal Council (inbound from Hawai and Washington) . Previous experience listening to 20m SSB did help. I did find a copy of the programme, and transcription at http://keranews.org/post/walter-cronkite-assassination-john-f-kennedy

As part of the Memorial Activities DSO held three concerts  entitled "President John F. Kennedy Memorial Concert"  for which we managed to get tickets for the Nov 24 Performance. The concert opened with a commissioned work by CONRAD TAO The World Is Very Different Now. The piece was a bit nondescript, but scenes from the period were projected on a huge screen over the orchestra which were very interesting. Next was SIBELIUS Violin Concerto with the Soloist Joshua Bell who was brilliant and highlight of the concert. After the Intermission MILHAUD Murder of a Great Chief of State was quickly followed by BEETHOVEN Symphony No. 3, Eroica which was well conducted at a faster than normal by Jaap Van Zweeden
Posted by g4fre at 23:23 1 comment:

While looking at signals on 474.2kHz using the ANAN-10 and the Clifton Labs Active antenna I noted that the A/D overload warning in PowerSDR would come on often. I hooked up the ANAN-10 and used the KISS wideband view to see where the big signal was. The answer was "in the medium wave broadcast band. The loudest station peaked -27dBm into the transceiver in the daytime. Looking on the Spectrum Analyser one can see the lots of broadcast stations below 1MHz (nightime view) 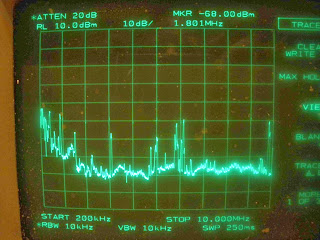 I then remembered,  that to protect my K3 from a very local broadcast station on 1.7MHz, I had built a 1.7MHz Highpass filter. It didnt take long to find it in the storage unit, so I put it in front of the ANAN-10. Overloading went away. I also looked on the spectrum analyser:- 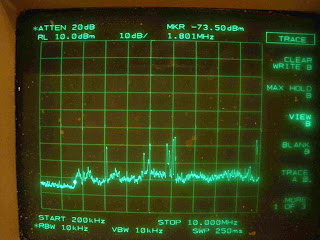 Everything below 1.8MHz has gone.

Curious,  I went to the Apache-labs web site and looked at the specification of the ANAN-10. Whereas it has LPF after the PA to comply with spurious emissions, it has NO filtering in front of the receiver which is broadband 10kHz-55MHz. May be time to look at some BPF for it! The only good thing about the lack of filtering is that this is fine for running the DL3HVH CUSDR32 software which allows same time monitoring of 5 bands (160 thro 10m) off a sngle antenna.
Posted by g4fre at 17:13 No comments:

ANAN-10 as a Transverter Driver

While aligning the G4DDK 4m Xverter, one thing I did discover on the ANAN-10 was that the output from the Xverter port is not vey clean. 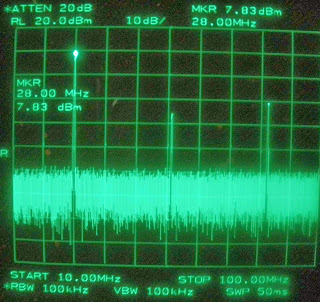 I then backed off the output ~3dB to 5dBm and things improved dramatically. 2F was over -45dBC, 3F was -28dBC 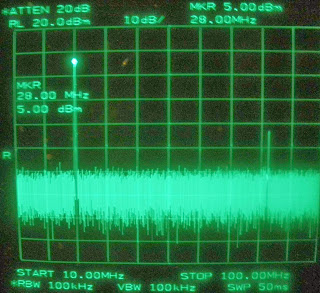 The moral is;  dont push the PA on the Hermes board and always use a 28Mhz LPF.  To be safe the transverter was left set for 3dBm drive and an LPF will be built:- 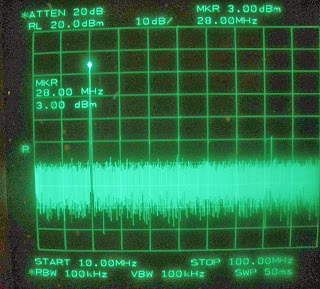 2F is -48dBC, 3F is -32dBC.  For the record PA gain is set for 43.0 in power SDR and the xverter output coupling  was set to -19dB by choice of resistor values on the PCB (My hermes board came from TAPR which did not have the resistors or connector fitted for the transverter output). My setup was assembled shortly after ANAN-10 was launched. It used the Hermes board from TAPR and the PA board/Case from Apache-labs. The completely assembled version was on back order. The 3 antenna ports are left unterminated The TX port on the Hermes was terminated with 50 ohms as the board is still generating around 250mW when the transverter output is 2mW

While over in England a month ago I managed to get one of the Beta short kits for Sams new 70/28MHz Transverter, the subject of his talk at the RSGB HF Convention in mid October. It is also described here. The hard to get components Sam supplied,  but the rest were all obtained from Mouser electronics

Took a couple of evenings to build and align. Interfacing with my Anan-10 SDR was easy as the xverter has split 28MHz input/output. Output was measured at 21dBm and the gain was 16dB, very much to specification.

I had hoped to put it in a German tinplate box to shield it from the Amplifier module but it is too small. Will have to rethink the housing.

Next task is to build an amplifier to provide sufficient drive to drive my 300W solidstate amplifier for the band. 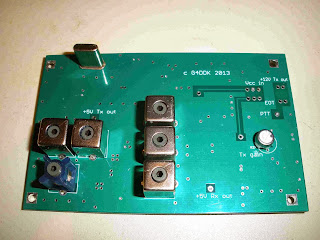 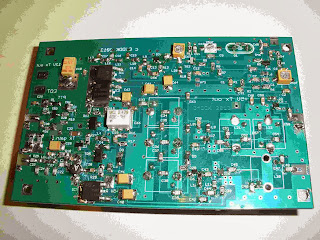 I had been looking for a 7" display to use with my Beaglebone Black spectrum analyser for a while. The recommended 800x480 resolution LCD7 is still unobtanium. Searching ebay I saw many 7" LCD kits (ie uncased) with HDMI/VGA/2 composite inputs running off 12V, so I ordered one for $50. 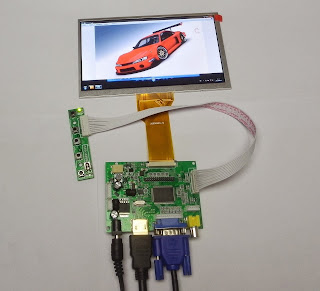 It took just 10 days from ordering for it to get here. It was VERY well packed in bubble wrap. It powered up fine and displayed VGA from this laptop, composite video from the RPI and HDMI from the BBB with no issues. Just need to find it a case to protect it

This display system doesnt have the high resolution needed for some projects but will work fine as a portable monitor.  For a higher resolution small display for the RPI/BBB  I have signed up for the kickstarter project hdmipi-affordable-9-high-def-screen-for-the-rpi
Posted by g4fre at 02:40 1 comment:

Having built the WA1ZMS loop, I was intrigued to see how low in frequency it would work without retuning. The lowest frequency signal I could think of seeing a signal was WWVB on 60kHz so i set the ANAN-10 to that frequency

I then searched the internet for a decoder. There were a lot of hardware decoders but very few that could decode audio input to the soundcard. I then found clock1.1 from F6CTE which was easy to install and has a choice of time signals it can decode:- 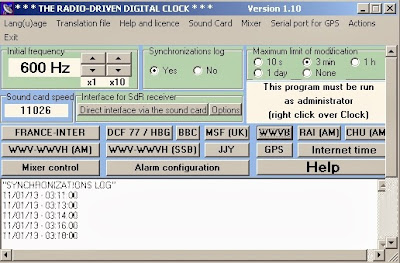 One point to note is that after being installed the programme auto launches into a calibration routine for 3 minutes during which time there is no spectrum display. Make sure the frequency matches the frequency of the incoming audio tone. The following shows a complete time sequence reception:- 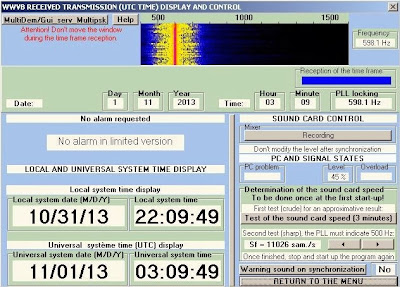 Admittedly this solution is not the most cost effective. Last year I picked up an Oregon scientific WWVB clock, with LCD display and alarm functions for $1 from the local charity shop!
Posted by g4fre at 16:45 No comments: