I thought for a change I would run the FT817 on wspr overnight on 40m and see where it could be seen. Im pressive results,  especially DU1MGA for a new country on this mode 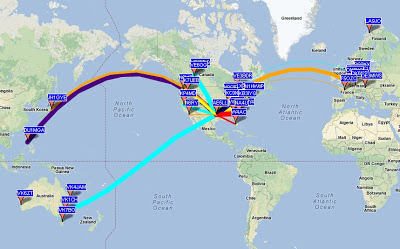 WSPR on the MK808 under Picuntu...Not Recommended

Time to try WSPR on the MK808 under Picuntu. Using the same method as previously used it installed without issue. I plugged in the IMIC and let it run on 20m

First thing I noted was that the waterfall display was flickering and alternating between two completely different displays. The second thing I noticed was that the "sound card calibration values" at the bottom left of the screen were not at their normal 1.00 ish but were at around 0.5. Not surprisingly I got no decodes. I tried adjusting a whole load of settings but still no decodes. I tried the IMIC under Ubuntu and it worked fine. Time to move on to other projects.

The other issue with Picuntu is its screen resolution. It ONLY supports 1080P mode so if you have an HDMI display with any other resolution it looks terrible, text looks particularily badly defocussed. Especially bad was.the display when I hooked the MK808 up to the Lapdocks HDMI input.

The first task was to get Android back. The reset to flash load button didnt seem to work so I took the cover off. Bit of plastic was jamming the switch, soon removed. While there I took some pictures.


After reassembly, luckily the original rom image for the MK808 is available at http://tabletrepublic.com/forum/mk808/mk808-firmware-download-3065.html so I applied that to the MK808 using the procedure they state and Android was back up and running.

I then took a further look at the miniand,com web site especially the complete process document. https://www.miniand.com/wiki/Picuntu+Linux+Step+by+Step+Installation so I went all the way through, installing their recovery image along the way

Booted the MK808 in Android. opened terminal window, did "su" followed by "reboot recovery" and it started to boot in what looked like Ubuntu. Again no wifi, fixed using the process in the previous post and command line was off bottom of screen. Did updates, still no joy

I did try the "faulty image" sd from last night and it booted fine, but still had the same issues

Searching the web I then came across an 8GB image of picuntu RC0.9 "picuntu-linuxroot-0.9-RC2.2.img" which had everything already in the image. Tried burning it to an 8GB micro sdhc card, using win32 image writer but it refused. saying card was too small. Tried a patriot sd card, same issue. Luckily I had a 16GB card so I put the image on there without problem.

Powered up in Android, did reboot recovery and up came Picuntu, with the Xubuntu desktop displaying a picture that fitted the screen. Opened terminal window, could actually see what I was typing. Progress indeed.

Good news was that when rebooted the MK808 came back up in Android. Quit while ahead, WSJT and WSPR can wait until tomorrow!

Having had a play with Android on the MK808, I decided I needed to install Ubuntu so I could install WSPR and WSJT

Searching the net I discovered there is a reduced version of Ubuntu 12.10 called Picuntu see .http://ubuntu.g8.net/ that can be used with the MK808. You put Picuntu on a micro SDHC,  having declared it as a recovery device and boot from it, so you can still use it on Android

I also discovered there is a version of Android that can be loaded on the MK808 that  has some improvements, has the code to boot from recovery, has root priveledges, has "reboot from recovery" built in,  and makes more memory available.  see http://www.freaktab.com/showthread.php?3207-NEW-MK808-Finless-1-6-Custom-ROM. It was installed with the instructions in the ROMS readme file. When the MK808 was booted it came up in Android mode and it had wifi once i made sure the wifi interface was eth0

Next it was time to write the picuntu image to the microsdhc card. I found a technique at https://www.miniand.com/wiki/Picuntu+Linux--2-Creating+the+linuxroot+filesystem. Put the card in the MK808 slot, rebooted in recovery mode. It objected saying damaged card. Powered off, tried again same problem. Lots of messing around until it finally rebooted into Picuntu, the only issue was there was no sign of Android any more! The terminal window did not fit the TV screen (command line was 6" off bottom of screen) which was a challenge and no wifi.  Lots of things were tried to get wifi until i came across a posting on http://code.google.com/p/rk3066-linux/wiki/PicUntu:-

then change  /etc/network/interfaces to :-

This worked and no i had wifi to do apt-get update. I also tried to install gnome desktop, but after 2 hours it installed, looked ok, but when it rebooted it complained it was running in low res, gave me some boxes to click on to try and fix the issue but none could be clicked on. Same issue when i rebooted. Time for a rest!

A replacement for my Raspberry Pi?

While researching other uses for the Atrix lapdock I came across some android based TV players.   They are often referred to as "Mini PC on a stick"! as they are only slightly larger than a USB thumbdrive. They  had USB ports (mini usb connectors) for peripherals,  onboard WIFI and an HDMI output (mini HDMI connector)  for connecting to a TV. They are intended to stream Video from the internet and display them on a TV. There was a selection at www.geekbuying.com  Initially I looked at the MK802 which had a Allwinner A10 ARM Cortex-A8 processor for $45 but then a spotted the MK808 which for just $10 more ($55 shipped) had a Rockchip Dual-core Cortex A9 RK3066 CPU. So I ordered one.

It took 10 days to arrive from China. and was supplied with PSU and all the needed cables.  It had Jelly Bean Android 4.1 build loaded and didnt take long to get it up and running. It normally sends audio out of the HDMI connector to the TV but has no provision for audio Input. Luckily it recognised my Ipad's IMIC so it was soon working on Skype with very good quality video conferencing.

I then spotted that there is a version of Ubuntu for the MK808. called Picuntu. Its getting even more interesting!

I may get to replace the "huge and underpowered" raspberry Pi! I have already seen one person using it with a TV dongle to stream ADS-B signals consuming less than 10W!