As the BARTG HF RTTY contest does not have different power sections I thought it would be a good time to try the new SPE 1.3KFA Amplifier on RTTY.

Originally I used the 4 band data lines from the K3 to steer the amplifier to the correct band, but experience showed it was better to use the CAT data giving the exact frequency to steer the internal ATU quicker. This was easy with the K3 but the K3S was a little harder to engineer as described at K3S to SPE.

I continued running with the amp on "mid" for a while,  then, after a series of CQ the amp switched to "low" and complained of overdrive. I backed off the drive to give 400W and continued running and had no more issues for  the rest of the contest.

Explaining my findings to G4BVY after the contest he said that G4CLA had similar issues at P44K  when running an SPE amp on FT8. He found the efficiency of the SPE amps on "low" is much higher than on "mid" or "max" hence less overheating so less alarms.

Previously we had used the Elecraft KPA500 on rtty contests. This had no issues running 500W output for a 48 hour contest, apart from the noise of the cooling fans.

From the results the amp seems to have worked fine, 1st in EU, beaten only by a Californian! 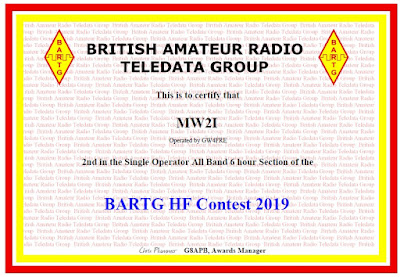