The Langstone Narrowband Transceiver with Pluto and RPI 4 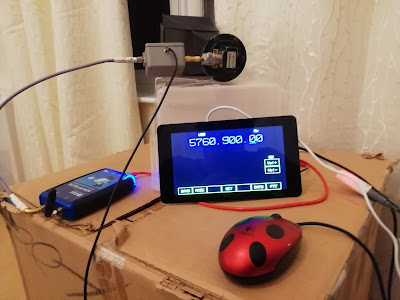 At the RAL TV meeting last year G4EML demonstrated a narrowband transceiver ("Hayling") using a raspberry Pi 4 a 7" LCD screen USB soundcard and an Adalm Pluto. Talking to G8GTZ at the recent Didcot Rally I found that the code has been uploaded to github ("Langstone")so on my return from the rally I decided to try it out.

The first attempt at building the code resulted in a no frequency display on the screen. The log seemed to be objecting to my USB sound card, so I changed it for another one I had and I was getting  the frequency readout but no audio

I then noticed that the display seemed to think I was on transmit. I consulted with G4EML and found that there should have been a pullup resistor on the GPIO PTT input pin. With this modification the display indicated RX and i got receive audio and could hear signals

I took a listen to my transmit signal. The dots sounded fine but i discovered the centre button on a 3 button mouse was needed to send CW, which I didnt have. I got no audio on transmit until I discovered the USB sound card mic input needed a computer headset (electret) microphone rather than my (dynamic) heil headset

I mentioned my findings to G4EML who updated the code to have a key input and a PTT output to drive an amplifier. He also added band output pins to auto switch external amplifiers and preamplifiers

I was then interested  to see how the system would work as a microwave IF. I connected it the radio on 144MHz to my 5760 to 144MHz Transverter and could hear the GB3OHM beacon on 5760.9MHz on a horn antenna. I then realised the pluto works directly on 6cm so I connected it directly to the horn antenna and could hear nothing. I then used the KX3 and the transverter to calibrate the Pluto and found there was a 65kHz offset, on which frequency I could just detect GB3OHM. I dug out a DEMI ATF36077 preamp and put that infront of the Pluto and the beacon became quite readable

All that is needed now to make the rig suitable for portable operation is a panoramic display!
Posted by g4fre at 23:34 No comments: