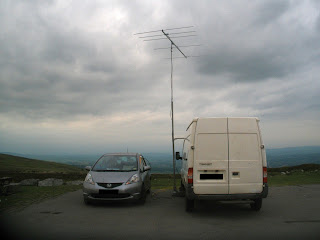 After the success during the previous Sunday's 4m contest, thoughts turned to the 4m UKAC the following Tuesday evening. Blorenge is much more hospitable at this time of week and it was much easier to get to directly after work than British Mountain

This time we used Rogers Van to support the 5 ele Powabeam at 20' Again the K3S drove the Anglian transverter then the I0JXX amplifier module, all operated from the Honda Jazz.

There was some DX heard while setting up from EA and IC8, but it disappeared as the contest started. Conditions on tropo were poor, but we ploughed on, listening around between qsos. We found EA6SX who we worked at 1442km as the best DX. After this excitement the search for multipliers continued. No continental DX was worked. Northern English squares were well represented but despite calling a lot that way, there were no sign of GM stations. 109 QSOS were made in total 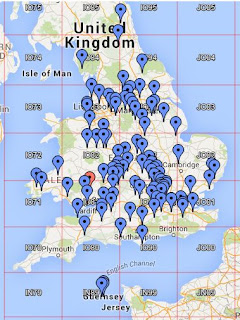 Postscript
The results have been published very speedily... within 12 hours of the entry deadline, AND the writeup contained more details than "the next contest is on xx/xx/2016! Looks like only our station worked the Sporadic-E

Having finally  finished integrating my I0JXX dual band 50/70MHz amplifier it needed trying out. The contest calendar showed a 2 hour 4m (2nd cumulative) contest so we decided to give it a try. Blorenge is no place to be on a Bank holiday Sunday so an alternative was needed. Roger suggested British Mountain which was a bit more remote. I had never been there so I went there via his house, so i could follow him. The route was challenging for both vehicles. As we neared the destination we noted a vertical antenna and a tent, which caused concern, Dropping by and introducing ourselves we found they were CBers so we should have no trouble to us on 70MHz. We moved 100m along the road and setup the station. The 5 element Powabeam was put on 25' of pole with guys. The rest of the station was the K3S (on its first outing) and my G4DDK Anglian Transverter. We also got to try the audio boxes I had made which allows the operator and logger to choose any combination of main and sub RX audio

When the antenna was connected the band was full of wideband signals. Sporadic-E was in progress, the band was occupied by FM broadcast stations from Eastern Europe. SQ8EP was worked before the contest, but during the contest, despite the broadcast SP-E signals there was no SP-E dx available, the best dx was PF7M. The Northern English squares were well represented but despite calling a lot that way there were no sign of GM stations. 71 QSOS were made in total. 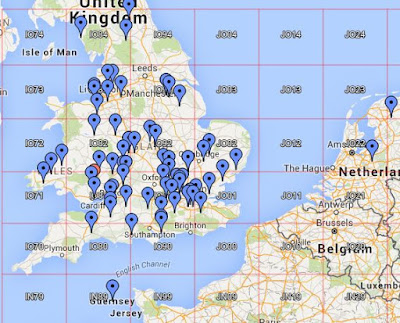 A friend of a friend stumbled across a youtube video from visitors to the CB station wondering what was going on at the white van up the road from the cb station! The video is here  https://www.youtube.com/watch?v=jJ5Bs29CXGY   The marauding sheep timestamp the recording time 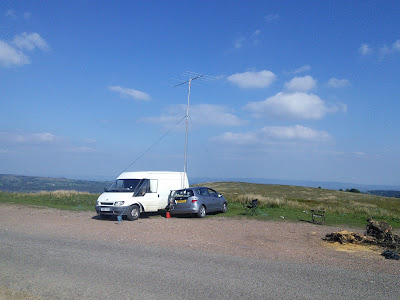