Surfing the web I came across an article on the Ham Radio Science page http://www.hamradioscience.com/android-meets-the-rtl2832u/  with an app to use the SDR dongle I had previously used under windows and Ubuntu on my Nexus 7 Tablet under Android. The app is called SDR Touch, the authors web site is at http://sdr.martinmarinov.info/ . All I needed was  the appropriate OTG micro USB cable.

Firstly I downloaded and installed the demo version of the software and driver from the web site. I found my OTG cable that I bought after the Nexus 7 but never used. I plugged the dongle into the micro usb port via the cable and launched the App. It failed to find the receiver. I then noticed that the blue light had not illuminated on the receiver. Very Strange!

A trip was made to the local emporium (Frys) and a $5 OTG cable was purchased. Interestingly the sales lady asked what tablet was for. When I said the Nexus she said it would work, if I had a Galaxy it would not. Obviously all OTG cables are not created equal!

Now when I plugged the receiver in it lit up, the Tablet found it and I had a spectrum display. Tuning to the local classics station it demodulated nicely. 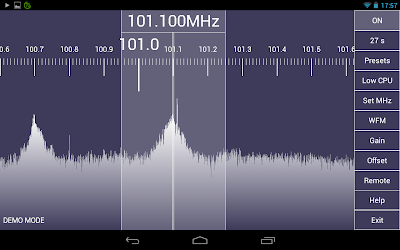 The demo version has restricted features (no direct frequency entry, only 30secs of spectrum display, no waterfall display and  no presets) but I was so impressed with what I had seen so far that I went to the app store and paid my $9.99 to upgrade from the Demo to the Full Version of the software. This was easily installed and the following shows spectrum, waterfall and presets:- 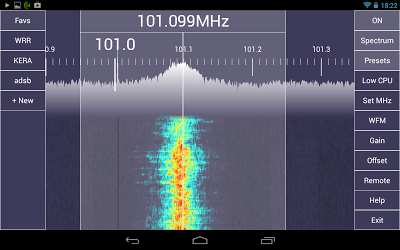 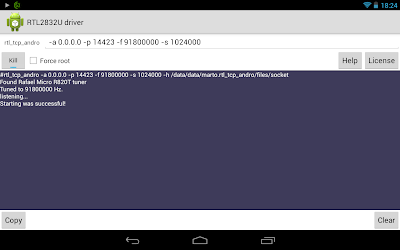 Very useful discovery.
Posted by g4fre at 01:08 No comments: 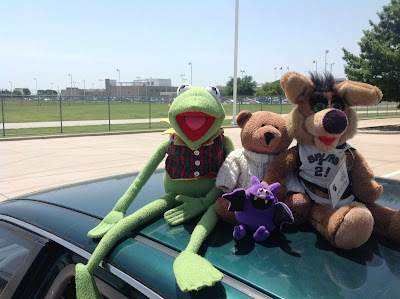 While staying in a hotel in Plano a few weeks ago, I was browsing the tourist leaflets in the lobby and was surprised to come across one for  the US Bureau of printing and engraving in Blue Mound, just North of Fort Worth. Until that point I thought all money was printed in Washington DC. The interesting point was that they did tours. http://www.moneyfactory.gov/tours/fortworthtxtours.html (whoever named the web site had a sense of humour!)

So Friday morning after the morning rush hour finished I drove over there. It took just over an hour, the biggest problem being the roadworks on I820 on the north side of Fort Worth

There is a separate entrance for the tour with security checks (no cameras, computers, phones, backpacks, Mace, explosives or any other electronic sevices). You then board a bus which takes you to the main building. There is a museum on the ground floor which was fascinating. For instance I discovered why the south got known as Dixieland. The Citizens Bank of Louisiana, a predecessor of J.P. Morgan Chase and Co., issued its own notes before the Civil War with the word "Dix", ten in French, on one side of the note. The region got know as the "land of Dix" which got shortened to Dixieland 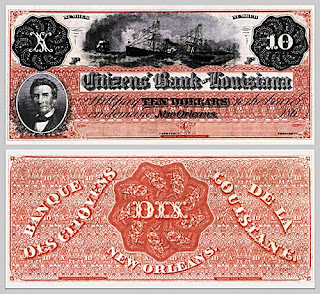 On the first floor is a film theatre where there is a film showing you the printing process. There is also the entrance to the walkways so you can go on an audio book guided tour and see the printing machines in action. (until last October a guide did the tour but that stopped with Federal budget cuts!). Due to printing notes involving 3 printing presses and drying time being a couple of days it takes around 2 weeks from the paper input to the printed notes being given to the Feds. I also discovered there is a Damaged currency unit that redeems partially destroyed or badly damaged currency

Email ThisBlogThis!Share to TwitterShare to FacebookShare to Pinterest
Labels: Bureau of Printing and Engraving, Dixieland

The USPS had a busy day delivering today!

The new side panels for the KX3 arrived and took only 5 minutes to fit (including finding the correct screwdriver). The perspex cover is on backorder but the side panels are already protecting the knobs

The "knurled whip" sleeves arrived from Budipole and now the whip on my active antenna doesnt wave around. I might be persuaded to make another PAC-12 Antenna now as it will be more robust.

The DFS30 multiplier to be used as part of the new W5HN 6m arrived from G4HUP in England in an impressive 4 days (faster than I get mail from Austin 200 miles south!)

Finally an MFJ 6m folded dipole arrived so I can test out the 6m beacon and keep an eye on the band! 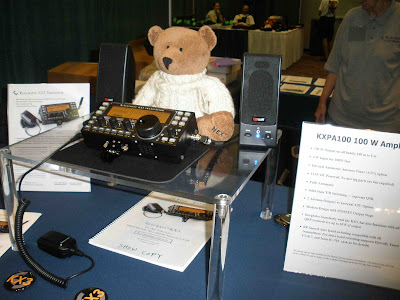 June brings the annual Hamcom hamfest to Dallas, which as always clashed with the ARRL June VHF contest.

As in the last three years I volunteered to help man the Elecraft Booth, but this year there was a change as Eric WA6HHQ and wife would not be attending, but I would get to work with Lisa, who I had spoken to a lot while placing orders over the phone, Dave  and Bob K6XX who I had spoken to but never met.

The trade show exhibitors this year started earlier at 0800 and officially closed at 1800, making a long day. Lots of questions, the most popular being "When can i get the KXPA100 100W PA for the KX3" , which was on display. The other new Elecraft item for me was the K3/0 mini, which is a remote front panel for remoting the K3 in a just sufficient box; you wont need to carry a full size k3 box in future. Bob was remoting his HF station in California using one, which worked as well as the Plano conference centre's wired internet would allow (horrible latency/reliability). The ISDR app for the Ipad to produce a panadaptor display (demonstrated by Eric at last years Hamcom) for the KX3 also generated a lot of interest, but a lot wanted an Android app!

I did see a useful  aftermarket product for the KX3 which was an extended pair of sidepanels and a perspex cover to protect the front panel knobs on the KX3. http://gemsproducts.com/covers.html So useful i ordered a set Sunday morning

The outside flea market wasnt too exciting, but i did get a GPS board with CDMA modem assembly for $1. The Inside Fleamarket produced a couple of the HP 12V 47A PSU (like i used to power my 100W 3400MHz PA) for $20 each and a Flexible solar panel. I also discovered that Buddipole now have a "knurled whip sleeve" to put over the telescopic whips with the 1/4-20 thread (as I use on my PAC-12 HF antenna) to stop the whip assembly wobbling in its ferrule, so I ordered a few

I did get to meet John Langridge. KB5NJD who also operates on LF as WG2XIQ, a station i hear often on 474.2kHz. Unfortunately I could not get to his talk, but I did persuade him to email me his Powerpoint which made for interesting reading.

The forecasted storms did not materialise Sunday morning so it was time to visit another state park and get some fresh air. Looking at the map I decided on the Elgin B Roberson (South) State Park which is on Interstate 30 SE of Dallas in EM12. Examining the lake I found a length of fishing line which I  used to suspend my longwire from a tree. The rig had been left on 6m, so I was surprised to hear beacons when I turned on:- W0DMK (DM49), WR7NV (DM25), W7RV (DM35) N7JW (DM37) and K7VLS (DN24) were all heard at good strength. Listening in the SSB area I found K0YW (DM67)  a station I had previously worked off the moon who came back first call, I also worked on SSB AC7FL (DM33, ex brit) N7AMA (DM33). K6LL (DM26) KS7S (DM41) N3AIU(DM45)  W7ZR(DM24) were also worked on CW. Not bad for a 60' end fed wire. It did prove the KX3 ATU works on 6m. Grid is EM12RU

I also worked HC2AO on 17m CW before heading home 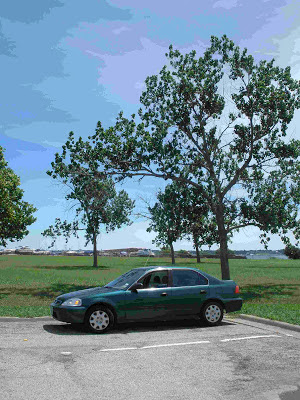 Listening to the local classic fm station in Dallas (WRR owned by Dallas council on 101.1MHz) I realised that the Van Cliburn International Piano competition was under way at the Bass hall in Fort Worth. The group of 30 entrants had been reduced to 12. Each semi finalist has to play a 60 minute solo recital AND a 40 minute concert as part of a quintet. This results in 8 three recital sessions in 4 days.

Ever since coming to North Texas I have wanted to attend a concert live so, having some free time, now was the time. I was surprised to look at 1000 saturday morning, online, that tickets for the 1330 session and the 1930 session were still available, so tickets were booked.

Its only an hours drive to Fort Worth so a slight diversion to a Texan pre-concert lunch was arranged to the Railhead BBQ in West Fort Worth. Central Fort Worth was traffic chaos as its the school graduation ceremonies were in full flow at the Fort Worth Convention Center, but there is a free car park across the road from the Bass performance Hall.

My seat was in the middle of a group of female Cliburn devotees who would be attending ALL sessions, so a lot of things that I had never worked out listening on the radio to the previous 4 competitions were explained.

In the afternoon session Clare Huangci (USA) did a recital including Schumann Symphonic Etudes op 13, Beatrice Rana (Italy)   in her Chamber piece did Schumann Piano Quintet in E-flat Major, op. 44 but the highlight was Nikita Mndoyants (Russia) who included a brilliant rendition of Mussorgsky Pictures at an Exhibition. All competitors have to include the commisioned work "Birichino" by Theofanidis. I didnt realise till they interviewed Theofandis that the Cliburn competition take his score and remove all markings from it before the competitors see it so they have to interpret it, which makes 30 variations the composer gets to hear (no they cannot email him and ask him questions).

The concert lasted until 1645, so hunger started to set in, the 2nd session started at 1930 so I decided to go to PF Changs restaurant, just up the road from the concert hall and just have a Banana spring roll and Ice cream desert while watching Ice hockey on the TV.

I enjoyed the afternoon session much more than the evening session, but I have never really enjoyed chamber pieces. After the concert finished the graduation ceremonies were still going on so we enjoyed a firework display 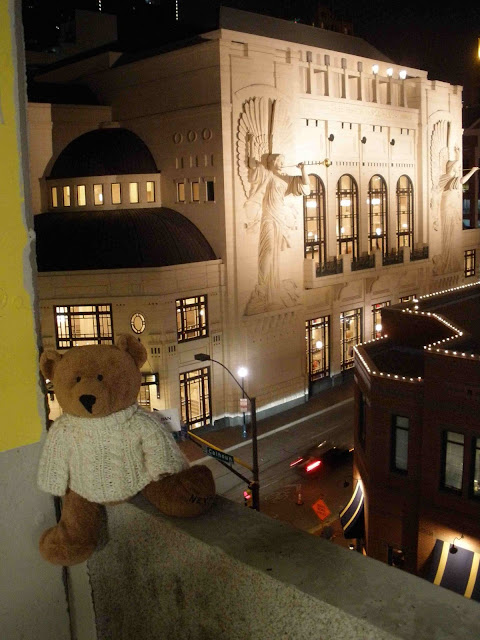 I got back to Plano at 2330, a long day!  The good news is that ALL concerts are being streamed over the internet at cliburn.org so I can hear the other 6 competitors and track progress
Posted by g4fre at 00:56 1 comment: