Originally I had intended to do this contest from Wales. However having blown up the 60W amplifier and the transverter IF pin diodes again  (due to the minimum power of the K3 being 3W) early Tuesday morning I decided not to risk the trip which would involve getting the generator but rather try the equipment locally.
Having tried Ankerdine hill in the past and found it blocked to the North  it was time to try somewhere else. With Roger G4BVY we had previously found a tump in IO82UA which looked good on paper, time to take a look. My "small"  system would be used. This is a K3+ G4DDK2004 Xverter +G4DDK VLNA and Wimo 44 ele. It would also be fun to try assembling my 14' Portaple mast, which collapses to 3' and is an easy fit in the Honda Jazz for the 1st time. This would all work off 12V from the car  and give me 10W 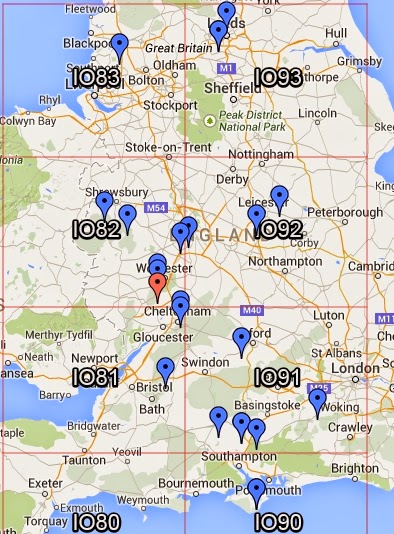 Tuesday night was the 2m UKAC contest and as the clocks had changed, (enabling setup in Daylight), it was time to go portable from Blorenge, IO81LS again. As the RSGB prop forecast said conditions should be good  to the east I also took along a small 24G system to see what beacons I could hear before starting setting up the 2m gear.  I took my normal 24048/432MHz transverter (retuned from 24192MHz it used in the USA) with an FT817 as the IF and a 20dB reference horn. Sure enough upon arrival there was a big Inversion layer visible to the east.   GB3CAM at 210km was quickly found and was a good decode. GB3ZME was also a reasonable signal at 105km LOS , but not on the direct heading of 020 degrees but on 070 degrees! No other beacons were heard (GB3SCK and GB3AMU were considered possibilities)

The UKAC on 2m sounded like an HF contest on 20m. 144QSOS in 27 locators with the best DX being DJ2TX in JO33 at 731km. Used 300W (due to the auxiliary equipment more power tripped the 1000W generator) to a 9 ele at 15' from Elecraft K3 with solidstate amplifier and HA8ET preamp for the first 2 hours Then there was a generator incident so a KX3 running 2W from its internal batteries (I hadnt seen the need for the KX3 DC power lead!) was used for the remainder of the contest but 10 stations out to 350km were still worked!

When we moved to the USA in the early 90's Roger GW5NF got the FT726R that was my primary VHF rig. It did make a trip to Gibraltar on the 1984 ZB2IQ expedition. Roger subsequently  used it with G4VXE off a car battery for Backpackers contests but had recently retired to the shack floor due to some issues. I decided it was time to rejuvenate it

First issue was that it did not work off the internal mains supply. Looking at the shorting plug on the back panel that had been used to supply 12V from the portable battery the link had not been removed, allowing 12V to be fed into the output of the internal PSU. Luckily Yaesu had foreseen this issue and fitted a fuse which had duly blown. The fuse  was replaced and the 12v wire removed from the plug and the radio lit up off its internal supply

50MHz and 432MHz receiver and transmitters worked fine but 144MHz was quiet on receive (no sign of GB3VHF) and only produced 3W on transmit. Occasionally blipping the ptt would increase the receive noise and the beacon would appear. An internet search revealed the radio is known for having a sticking relay in the 2m module which some had cured by burnishing the contacts whereas some had needed to replace the relay. Time to examine the module

Sure enough, in the quiet receive state no 9V was being supplied to the receiver chain by the relay. The relay, FBR221D012M  is no longer available  (note the available FBR221AD012M is very different). It was suggested that the contacts needed burnishing so the cover was taken off and the contacts burnished and adjusted. . This seemed to fix the problem for the time being. The transmit chain was also aligned as per the manual; a load of flux was found all over TC01 which was removed and adjusting TC01 and TC02 increased  the power to 18W which was reduced,  as per instructions to 10W maximum. The receiver was already tuned and could not be improved.  It was noted that the front end mod using a BF981 and the IF gain increase mod had previously been done, making it state of the art at the time

The radio has been successfully restored and has now been re-integrated into Rogers shack to compliment his TS2000. It easily drives the 2m and 6m amps to full output.