Upgrading the K3S for 475kHz

Having had the initial try of the K3S on 475kHz here It was time to properly implement the low frequency bands on the K3S. The first step was to convert both KBPF3 to KBPF3A (one on the main RX one on the SUBRX). It is a simple process requiring the removal of 2 inductors from the board and adding 3 capacitors in parallel with existing capacitors. To make it look neater I actually replaced the existing capacitors. While the KRX3 was open I also added the electrolytic capacitor specified across the 9V rail. The whole process took 30 minutes

I hooked up the RX antenna port to the PA0RDT active antenna in the loft and was pleased to see some DX:- 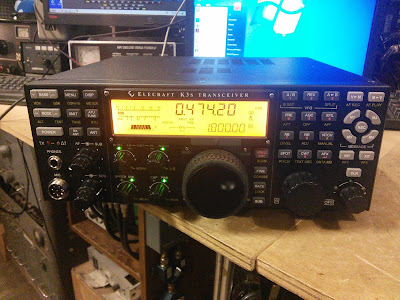 The one big improvement in the K3S, mainly due to the new synthesiser, is the ability to tune it down to 100kHz. The original K3 hardware only went down to 479kHz.  Using the K3S properly at these frequencies requires the installation of a KBPF3A. The original KBPF3 does not go down low enough in frequency, but can be easily modified.

As the filter board was not available we stuck a 40dB amplifier between the low 80m dipole and the RX Ant input, to make up for the loss in the normal K3S 1.5MHz highpass filter. The results on WSPR using the K3S internal soundcard were impressive:- 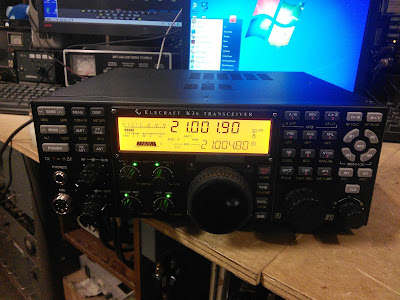 Having had K3 for a while now I was interested to see the arrival of the "upgraded" model the K3S. While it is possible to buy the modules to upgrade a K3 to a K3S having done the calculations it was cheaper to buy a K3S in kit form and transfer the "option" modules across.

It all went together easily enough despite some issues with K3 photos/figures appearing in the K3S manual (eg Figure 91).  It powered up fine and the VCO passed self test, so time to hook up an antenna. Nothing could be heard despite putting the RX on the TX7EU pileup.  As a check an HP signal generator was hooked up to the antenna port. It couldn’t hear -50dBm. Neither could this level be heard through the rx in port or the Xverter port. The radio was dismantled, all connectors checked, EEinit done, no improvement.

Time for more coffee, during which an inspiration. When I put the subrx into the k3 I remembered I had to remove a link in the KRX3 back connector. (J64A) So I searched the K3S manual. It appeared not to need the link as it was not shown in "Figure 31. RF Board Partially Assembled." or on the photo of the main rf board on Page a-14  or on "Figure 94. Installing the KBPF3A Option Board." BUT I noticed a link still shown on the legend on the PCB and its removal is still shown in fig44 of E740126A installing the KRX3A subrx. "Nothing ventured nothing gained", so I stuck a resistor lead in  the W4 link and the K3S burst into life. Sensitivity returned and the K3S was back to full health. Perhaps someone should have checked that when the K3 manual was converted to a K3 it was correct.

The other issue was the top left screw holding the bezel to the font panel would not bind. Close examination revealed that there was insufficient threading in the hole. After talking to Elecraft Support they shipped a replacement front panel, which arrived three days later and resolved the issue.
Posted by g4fre at 16:29 No comments: