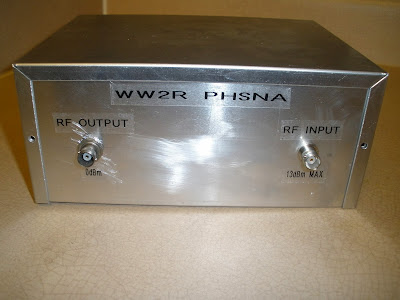 While working on some HF bandpass filters a few months ago I decided I needed a smaller test Instrument. I came across the PHSNA group on Yahoo groups who were using a cheap $5 AD9850 DDS module from China and an AD8307 Power detector controlled by an Arduino to make a Scalar network Analyser good to 35MHz or so. It sets the output frequency of the DDS, measures the signal with the AD8307 and sends the dBm value and frequency to a PC where the data can be captured and graphed in Excel or similar
Luckily a PCB was available for the DDS carrier board and the RF detector.  Their were two versions of the DDS board. One used the widerband ERA3 amplifier, the other used a discrete 2N5109. All the components were available from Mouser. The PCBs took around 1 hour to build. To provide extra screening the Detector PCB was enclosed in a tinplate box. The following show the two units in the enclosure and the Amplifer/Interface board with the DDS PCB. Yes the PCB has been modified as the onboard filter has incorrect values. The components have been removed and an external filter fitted. The Arduino is mounted under this PCB The unit is powered from 13V supplied  by the DC power connector on the Arduino, ensuring the amplifier stage has full output. 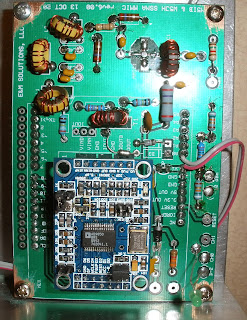 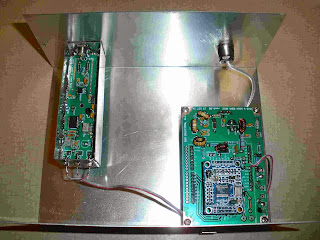 I found a W8DIZ 15m bandpass filter that I had built from the kitsandparts.com kit to try the PHSNA on. First I connected the dds output directly to the detector input and recorded the power 17 to 26MHz. I then put the filter in line and again swept 17-26MHz and recorded the power. Using excel I plotted the difference between the two sets of readings and plotthed the filter characteristic:- 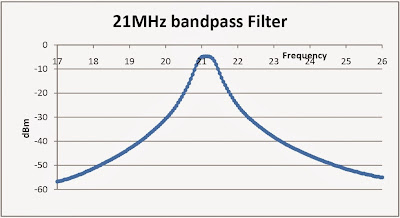 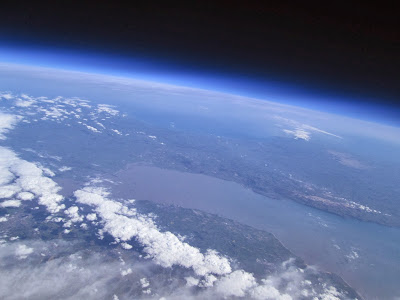 While looking for data on the Ublox GPS unit on my Arduino GPS shield I came across the Stratodean website. They use the unit for their helium Balloon ascents from the Forest of Dean. They have some very impressive videos of the ascents which landed in Milton Keynes and South Wales. The whole design and building blog makes very interesting reading
Posted by g4fre at 23:19 No comments:

Amplifier for the Kanga/M0XPD DS shield

It was time to look at an amplifier for the Kanga DDS shield . I found their "Sudden TX Shield" on the web site. This would have worked fine but would have taken a couple of weeks to get to Texas and would have cost 24.95GBP plus 20GBP shipping. A homebrew amplifier was needed.

According to the M0XPD blog the Sudden shield is based on the G-QRP-Club Sudden Transmitter. The manual is available at http://www.gqrp.com/Sudden_TX_Kit_manual_40m.pdf . The junkbox had some 2N3904, 2N3906 and 2N5109 and I also had some plugin bandpass modules from my G0XAR Ulimate 2 Beacon transmitter. A visit to Radioshack produced some double sided PCB (Note it is not glass fibre PCB,  if you try to cut it with tinsnips it will crack in random directions) to build it deadbug style. The trackes were made with a scalpel and steel ruler.

Initially the amp was tried on 30m with a 2N3904 and a 2N5109. 1mW input produced over a watt of output from the LPF but driving it from the DDS shield gave just 100mW. Looking in the modamp box I found some MSA0385 which would produce 10mw output with 20dB gain. I added this to the PCB and found it had too much gain when driven by the DDS shield so an 7dB attenuator was added to the input. The "gain" preset on the 2N3904 allowed the output to be set from -10dBm to +32dBm which peaks at 0.5A at 13V. The 2N5109 got very warm but W5LUA provided a top hat heatsink from his collection on a recent visit 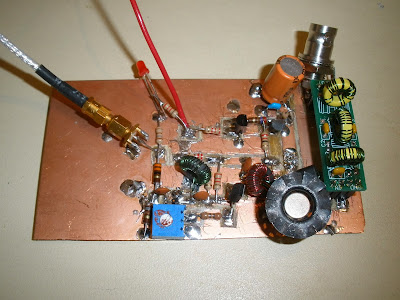 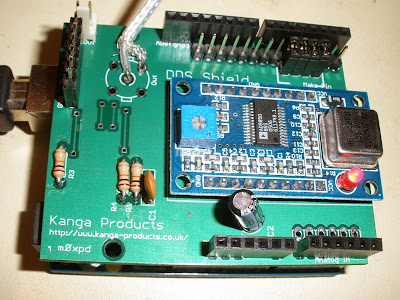 While in the UK last time I bought the "Kanga / m0xpd DDS Shield" DDS shield that fits onto an Arduino Uno. It uses one of the $5 chinese AD9850 DDS modules as the RF generator along with an 16x4 LCD with IIC interface and rotary encoder. Using the Occams beacon software of M0XPD I turned it into a trimode QRSS/CW/WSPR beacon as described at http://m0xpd.blogspot.co.uk/2013/10/occams-beacon.html. It took around 30 minutes to build the shield and I stacked it on a genuine Arduino Uno. I only had a 20x4LCD so the sketch needed modifying to accomodate its layout. It did  not have an IIC interface but they were available off ebay for $6

The M0XPD sketch needs modifying to accomodate the WW2R callsign. As suggested in the sketch I used the 'WSPRcode.exe' programme available from G4JNT web site to generate the WSPR code. Unfortunately the output format cannot be "cut and pasted" into the sketch and after numerous failed transposition attempts I looked for an alternate method. Luckily I remembered the W3PM "WSPRMSG.EXE" programme at http://www.knology.net/~gmarcus/ which allows cut and pasting the output directly into the sketch

An issue with the software is that the timing is derived by counting the processor clock which runs at 20MHz. Using the default timing count value (60000) WSPR decodes stopped after 40 minutes as the WSPR transmission start time had drifted out of acceptable range. By measuring the time delta over 10 cycles,  (monitoring the output on the ANAN-10 and Argo software), the correction factor was calculated and used (60127) This stopped the time drift issue for the time being.

As the Beacon has no idea of clock time the Arduino is reset at the start of an even minute and starts its internal clock from there. This is a little tricky but after practice i could get the start within 0.5S.

Obviously these issues could be eliminated by using a GPS receiver to get accurate timing. M0XPD has been looking into this,  but while waiting for the result I have started looking at the code W3PM used in his Arduino beacon shield.

The final issue was the frequency of the DDS clock oscillator. This is nominally 125MHz which is the parameter used by the sketch. However my WSPR transmissions were initially outside the range of the WSPR decoding programme.  The value had to be adjusted to get the output frequency correct as measured on a GPS locked counter. Initiially I also had drift issues (df=2 on WSPR) but by putting a tent (a towel!) over the dds board to stabilise the temperature the issue went away

Note the shield only produces -12dBm so it would be hard to spot if transmitting into a non optimum antenna, The AD9850 DDS produces output all the time, unlike the AD9851 the AD9850 has no provision to mute the RF output. A keyed amplifier will need to be the next project
Posted by g4fre at 21:51 1 comment: 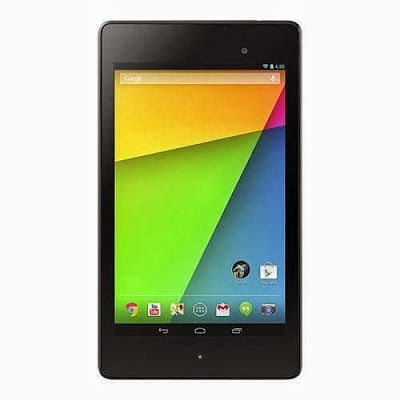 I have had a Nexus 7 (2012) for around a year and use it much more than my IPAD. When I saw that there was to be an updated version with front and rear cameras and an audio jack that supports headphone and microphone (like the IPAD does) I thought of getting one. The list price was $229 for the 16GB WIFI version was offputting, so I decided to wait until the "Black Friday" (the day after thanksgiving) Sales period. In actuality I did not have to wait that long as I encountered a good deal the previous Wednesday.and ended up buying one for $189.99 shipped.

It took 2 weeks to be delivered due to the post sales bottleneck!  When I opened the package, the first thing to be noticed was that it was thinner and lighter than the previous version. When powered up the display was also crisper being 1920 x 1200 resolution compared to the previous1280 x 800.

As advertised the 4 pole audio jack worked with my Ipad headphones on Skype. No more shouting at the tablet. This is promising improvement when using FLdigi app where previously you had to hold the tablet near the radio speaker which was prone to background noise.

There is no HDMI output on the Nexus 7 2012. However reading the online reviews of the 2013 model it has a slimport jack on the bottom (looks like a microusb connector to me) and an HDMI adaptor can be bought. Searching on ebay I found one for $18. I did make sure i got one where you can charge the Tablet with a monitor hooked up. This works well and allows videos to be played on the living room large LCD TV. 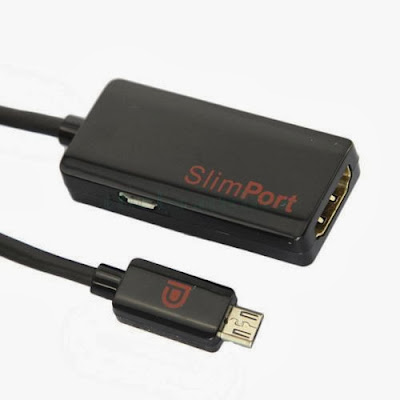 The only wish list item I would like is a microsd slot to extend the storage, however I can use it with the RAVPOWER WIFI disk as previously mentioned which ups the storage to 500MB. 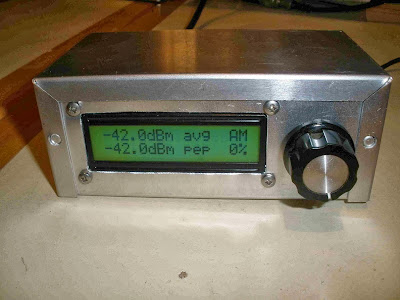 Although I can control the ANAN-10 remotely over the internet I cannot monitor the output power via the computer.  PowerSDR has a "forward power indication" but it isnt actually measuring the power at the ANAN-10 PA output! I could buy a minicircuits PWR-4GS USB power meter at $900 but I needed a cheaper option.

Searching the internet I came across a design A very simple to build, menu driven RF Power Meter, based on the AD8307 log amp by Loftur TF3LJ. It used a Teensy++  micro available at www.pjrc.com and a 16x2 LCD display. I already had a Teensy++ board and a 16x2 backlit LCD. All I needed was the AD8307. I while ago I had tried to build the W7IEQ SWR/Power meter published in QST Jan 2011 which used two AD8307, a PIC and an LCD. It was a disaster and I never got it working mainly due to software bugs which never got fixed in the code especially the version hosted on the ARRL website. I threw away the main PCB and box but kept the 30dB directional QRO coupler and the 4 PCB with AD8307 and BNC input connectors.

It did not take many minutes with a Scalpel to modify one detector PCB to match the TF3LJ detector circuit
The Teensy was mounted on a stripboard with a plug and socket , the whole unit was mounted in a 5x3x2" box.
The whole device is powered through the mini USB connector on the Teensy++. Programming was also done through this connector using the Arduino IDE v1.05 and the PJRC Teensy plugin. (note the plugin  wont even install with later Arduino IDE versions eg V1.5.2. Calibration was easy and requires 2 known signals 30 or 40dB apart. I used -12dBm and -42dBm available from my LPRO101 10MHz Rubidium.

The meter also enumerates as a serial port on a computer and can be made to continually output a power value in Watts at 4800Baud using the $pcont command:-

more detailed information can be obtained on a 1 shot basis using the $ppoll command:-

This allows remote monitoring.
Total cost (with new parts) would be around $75

The meter measures from ~-70dBm to +17dBm thro 440MHz. It has provision for 3 calibrations (eg HF, VHF, UHF) to accomodate calibration issues over that range  I also found the -40dB tap flat through 500MHz shown on the TF3LJ site but originally published in the W7ZOI power meter addendum article. With this I can measure up to 200W and I can have the power meter read directly as I can enter the 40dB offset

I thought of building 2 units one for forward power one for reverse power. Then I spotted that Loftur now has a Power and SWR Meter with bargraphs, using 2x AD8307 design on his website using a 20x4LCD and a Teensy++. I can see one getting built, especially as I already have two AD8307 PCB!