A few weeks ago I uncovered the Rotator and the control box for my KR600RC Rotator. Connecting it together and powering it up resulted in a lot of whirring from the rotator and only clockwise movement. Removing the cover the reason for the whirring was obvious; the drive band had perished.  I searched the web for the a replacement there was no obvious source. However there was a hint from the VKL reflector that the rubber nitrile band was a #29. Web Research showed that in the UK this is called a BS029, which were available on EBAY costing  £5 for 10, so 10 were ordered

The reason for no counter clockwise was also investigated. The reason was because the NC contact on the clockwise switch, through which the counterclockwise switch gets its power, was open circuit. Note that the 2 switches are different; the clockwise is DPDT (6 pins) , the anticlockwise is DPST (4 pins). Researching a replacement switch, I found someone was selling refurbished ones in Australia Kur02.com.au, so it must be possible to take them apart!

The replacement bands arrived last week so it was time to start repairs. First the rubber feet were taken off. The cover was then removed and the front panel detached. The gear train then had to be dismantled, by removing the calibrated bezel screws to get to the screws holding the metal cover holding the gears in place!) to get the band in place. Note that the rubber band goes round 3 axles to maintain tension

Powering up the indicator then worked properly. The broken switch was then taken apart by releasing the 4 lugs. I noticed that the 2 contacts had slightly different profiles. The non contacting contact was then removed and bent into a shape matching the working contact. The switch was then reassembled and was now found to be performing properly. Job done!

My only concern is how robust the controller is for mountaintop operation; I can see building an all digital controller with LCD display coming up!
Posted by g4fre at 15:53 No comments: 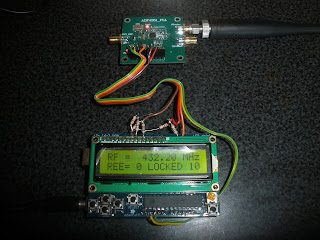 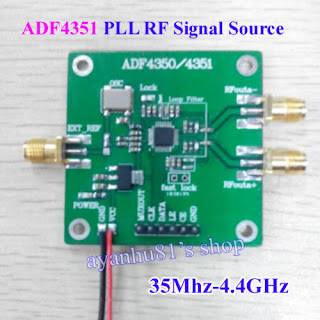 It took 4 weeks to arrive. The next question was how to control the module. An internet search revealed a design by F1CJN here  using an Arduino UNO and LCD shield with buttons from dfrobot.com, which I did not have. However I remembered in my collection I already had a similar LCD/Switch unit from adafruit This would need some code modification, time to remember how arduino's worked. It was not too hard as Adafruit provide the libraries and examples for this unit on their web site. The biggest issue was as my switch reading used SPI not the A/D converter of the original design it was much faster resulting in much keybouncing.  Some strategically placed delays stopped that issue.

I now have it working. Listening to the signal on 144MHz and 432MHz it sounds OK, if a little off frequency due to the cheap on board reference (6kHz low at 432.2MHz) but as the board has an external reference input that is not an issue. Next to take a look at the output spectrum, which is reputed not to be too good at lower frequency, then to put it in a box.

BEWARE OF THE GREEN BOARD VERSION! SEE UPDATED POSTING