47and 76 GHz from Blorenge after the CQWW RTTY contest 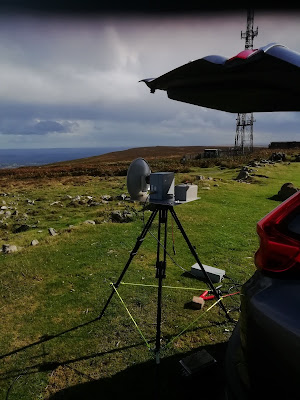 As I was off work for the week after the CQWW RTTY contest and was passing the Blorenge on the way back I wanted to try some more 47/76GHz TV. Noel G8GTZ was persuaded to come west to be the target

Arriving at the Blorenge at 1100 in high winds and rain squalls, we first tried the path to Birdlip, IO81WU at 67km  Two way qsos were had on 47GHz NB easily. I received Noels DATV signals easily but Noel was having trouble receiving me. After a lot of unsuccessful experiments, in desperation I reprogrammed the Lime to normal software and changed the Portsdown  setting from "Line DVB" to "Lime Mini" it all worked fine again. Two way 125ks DATV qsos were then successful. We then started on 76GHz but as s storm cloud had just come through and sat on the path no signals were received by Noel through the rain 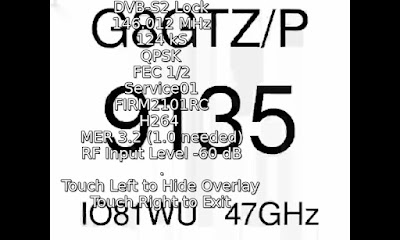 By the time Noel got to IO81XW81 the rain had cleared. Two way qsos were had on DATV at 125kS at 74km  76GHz was a bit more cooperative with a two way NB qso but not good enough for Noel to receive my high power DATV 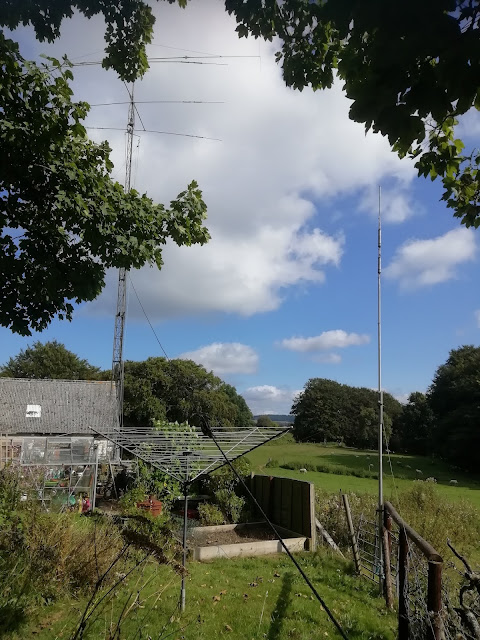 For a change this year Roger and I decided to try the MS section from MW2I. Having read the rules that MS doesnt really mean MS we set up the second K3S as the mult station. It didnt go quite to plan as the K3 went into "Hi sig" error mode and that was the end of that idea This is exacty the same issue as I had previously as recorded in my blog  where Q8 and Q9 had blown

So we ended up doing Multi op single radio 2 computers!

Conditions were good. More  JA worked on 40m than we knew existed, along with KL7 for a new DXCC. 80m was very good into W sunday night and after many years of trying a new DXCC ....GJ!. Only gotaway was PZ5RA on 10m during the brief opening Sunday afternoon

As Roger said afterwards, "It is a long time since we did all 48 hours of a 48 hour contest" . Luckily I am on vacation this week so I can recover

After returning from the contest I replaced Q8 and Q9 in the K3S. I also changed the three resistors to the values Elecraft finally settled on see https://g4fre.blogspot.com/2018/08/k3s-hi-sig-warning.html.