This years visit was made on Friday as usual. There was heavy rain as the outside area opened, so much so that the inside hall was opened early. A used Tonna 50MHz five element  yagi for £20 was purchased from the flea market with the intent of converting it to a lightweight 4m Yagi. Indoors a four section 20' swaged mast was finally bought (I thought about getting one last year!) from Moonraker

The usual big traders were in attendance, although some on a smaller scale than last year, for example Waters and Stanton. It was impossible to get near the QRPLABS stand as G0UPL had to queue of people placing orders. I have still to finally meet him after having previously had many transactions with him from Texas

The highlight of the trip was non transactional! A few months ago I assembled the BATC minituone receiver, but it failed to receive the DATV signal generated by the RPI, even though it passed self test so I put it aside. The BATC would be at Newark and I guessed would have real DATV signals, so I took the receiver along. Noel G8GTZ was only too pleased to try it out and it passed testing with flying colours. Now I can move onto assembling my Portsdown Transmitter modules
Posted by g4fre at 20:08 No comments: 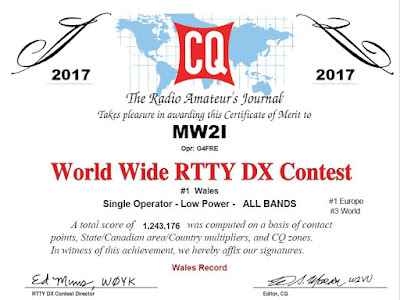