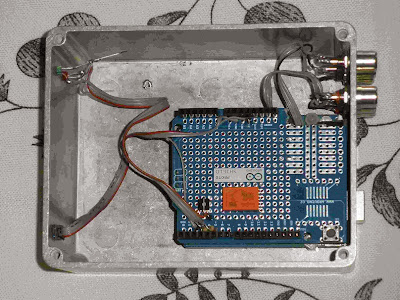 As is quite common nowdays , our TV does not have speakers, the received audio has to be sent to an external audio Amplifier. When playing back video files on the PC it also needs to send audio to the same amplifier resulting in the need to rearrange cables behind the TV when wanting to swap over. There had to be a solution

I took a look on ebay.com whereas HDMI switch boxes were available boxes to switch Left and Right Audio on Phono jacks were rare and expensive

I wondered if I could use the TV remote and build a decoder to switch between the 2 sources. As I had a couple of Arduino Unos, bought when on offer at radioshack, they seemed an ideal candidate

Searching the internet I came across some web pages at adafruit.com that would be useful. A walk to radioshack (I am now only 300 yards from one now) procured the necessary IR detector.It was hooked up to the arduino and the software loaded from http://learn.adafruit.com/ir-sensor/reading-ir-commands. I pointed the IR remote that came with my RTL2832 TV dongle at the decoder and saw the pulse codes. The software allows the pulse codes to be recorded.  and placed in the file you can use as a reference to switch arduino outputs. I choose the red button to choose TV as source and Green button for Computer.

Next a 6V DPDT relay was found in the junk box and mounted on an arduino protoshield board. The relay was switched with a 2N7000 FET from the arduino output. Two LEDs were added in software and hardware to show the audio source. The whole assembly was mounted in a Diecast box with a hole filed out in the front panel to allow the IR detector to be mounted. 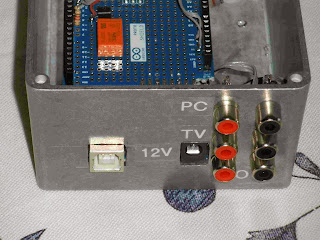 The arrangement worked fine but I kept losing the RTL2832 controller, which was small. I decided to use two of the spare buttons on the existing IR controller, Not hard, all I had to do was record the pattern and put it in the lookup file

A useful afternoons work!
Posted by g4fre at 00:37 No comments:

Elecraft finally published details of the mod to reduce the noise heard in the receiver when turning the tuning knob, especially on 6m The document is at. http://www.elecraft.com/manual/KX3%20Tuning%20Noise%20Mod%20rev%20B3.pdf
Tonight I did the modification that basically cut 3 pins off the KXFL3 module and took 10 minutes to complete. The fix was very good and I now hear no noise on 6m or 10m, even in a low noise location
Posted by g4fre at 06:55 No comments:

Having Bolted together numerous Elecraft products I decided i wanted to build a radio with a soldering iron. While I debated about getting a K2, I looked for some cheaper options, preferably olde worlde!

On ebay I came across a single tube regen kit at http://www.xtalman.com/kits.html. It is also sold on ebay. Everything is supplied except the batteries for $65 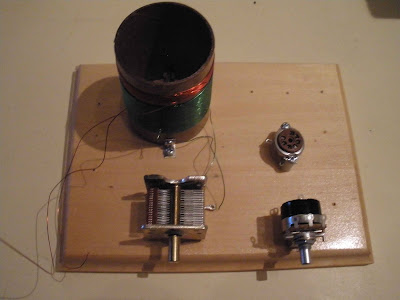 It did not take long to assemble as it is all direct point to point wiring. The receiver is battery powered. The heater supply is two D cells for 3V at ~30mA . The Anode supply is Five 9V batteries bolted together for 45V 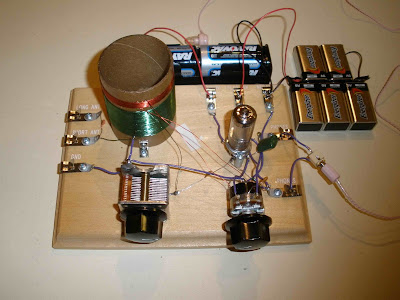 I hooked it up to a 60' wire and the ground was the mains ground. In daylight i could hear 3 local stations. In the evening I could hear 11 stations in 3 countries. Using a regenerative receiver takes some getting used to, but the technique soon came back!