While on a visit to the South Birmingham club G3OHM to do some K3 upgrades I took the opportunity to see how the PI4 mode works, having never used it before. Looking through the UK beacon list there are only a few beacons running the mode, but one was GB3MHZ on 2320.830MHz, which was audible on cw from IO92AJ at 220km. Software was installed on the I7 laptop, audio was extracted from the K3S via its USB lead and the system left to run for 45 minutes

As can be seen, no decodes were received, despite the cw being audible. The 4 tones of PI4 can be seen between the cw / carrier sequence

Having seen 6m and 4m RBTV pictures over the 230km path from Malvern to Kent over Christmas it was time to try for a 2 way QSO on 6m. I went to the Birtsmorton Tump at IO82UA and Noel G8GTZ went to Sparsholt IO91FN, a path of 73km. I used the Portsdown driving a retuned Nacton 6m/437MHz with the same transverter driving the Minituner on receive.

Despite high winds, making getting the 5 ele yagi into the air a challenge, the day started  well with Noel seeing my 30W signals at a 14dB MER. I went to receive and saw Noels signals, but before the receiver had time to lock the signal went away. Investigations at Noels end revealed a short circuit in his transverter, meaning the end of 6m testing 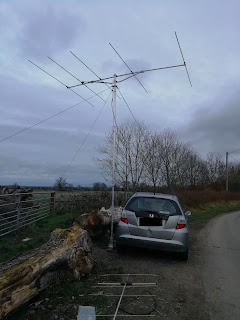 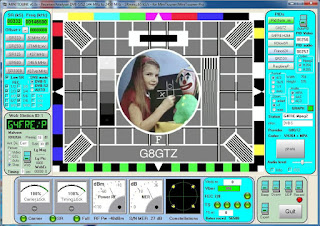 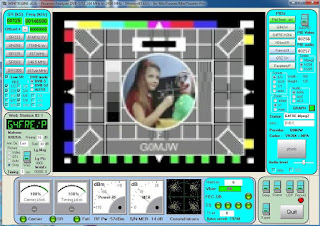