47 and 76 GHz man portable on the Malverns 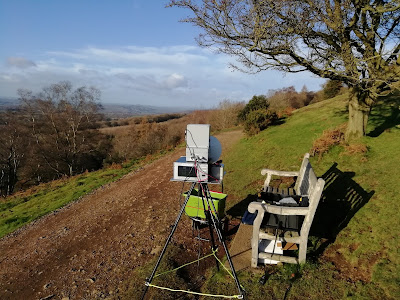 As G8GTZ and G8GKQ were going to the Midlamds Convention at Eaton Manor, it seemed the ideal opportunity to try to extend the 76 GHz record distance record. They would go to Titterstone Clee amd i would go man portable on the Malvern Hills. The hereford beacon would be ideal, but it has steps to the top, not ideal for towing a fishing trolley. Eventually a location on Black hill was found which was just an uphill slope approach from the North Hill car park

Having done my stint on the 160m ARRL contest from Florida i set out at 1200. The weather was ok and the RH was only 61%. However when i got to British camp it was very windy (gusting 35mph!) and was very cold. I set off up the path. Very shortly afterwards the bottom of the plastic container fell out and one battery landed on the floor. I proceeded with just one battery. Going to the summit of pinnacle hill was impossible due to the wind so i found a lower location IO82TB96 which still had LOS to Titterstone Clee IO82QJ85.

First we tried 47GHz and i received the loudest narrowband signals from Noel I had ever received from any loaction. A 47GHz DATV qso was easily had. We tried 76GHz but due to the wind it was impossible to keey the dish pointing corrrectly so the attempt was abandoned

Talkback was an issue. My ic706 was too heavy and my only ht did 2/4m, previously we had used 70cm. We tried to use the phone., I had coverage but Noel had flakey coverage which made coordinating an issue system. Time to look for a new HT for these occasions