Having upgraded the 2m solidstate amplifier I decided I should do the same upgrade to the 432MHz Amplifier.  The original writeup is here The Two same features were needed:-

1. There is no bypass position, so one cannot test the antenna SWR before letting the amplifier use it. This cost of the lack of this feature was learnt the hard way on my 70MHz amplifier
2. Currently the Elecraft K3 keys the DEMI transverter which keys the amplifier which sequences the antenna relays and preamplifier. There is no output for the Amplifier to properly sequence the DEMI Transverter along with the antenna relays and preamplifier, this needs to be added.

A bypass switch was added to the front panel along with a bypass LED. A phono socket was added to the back panel for the Transverter output. An hour was spent adjusting the PIC code and all feature additions were accommodated. 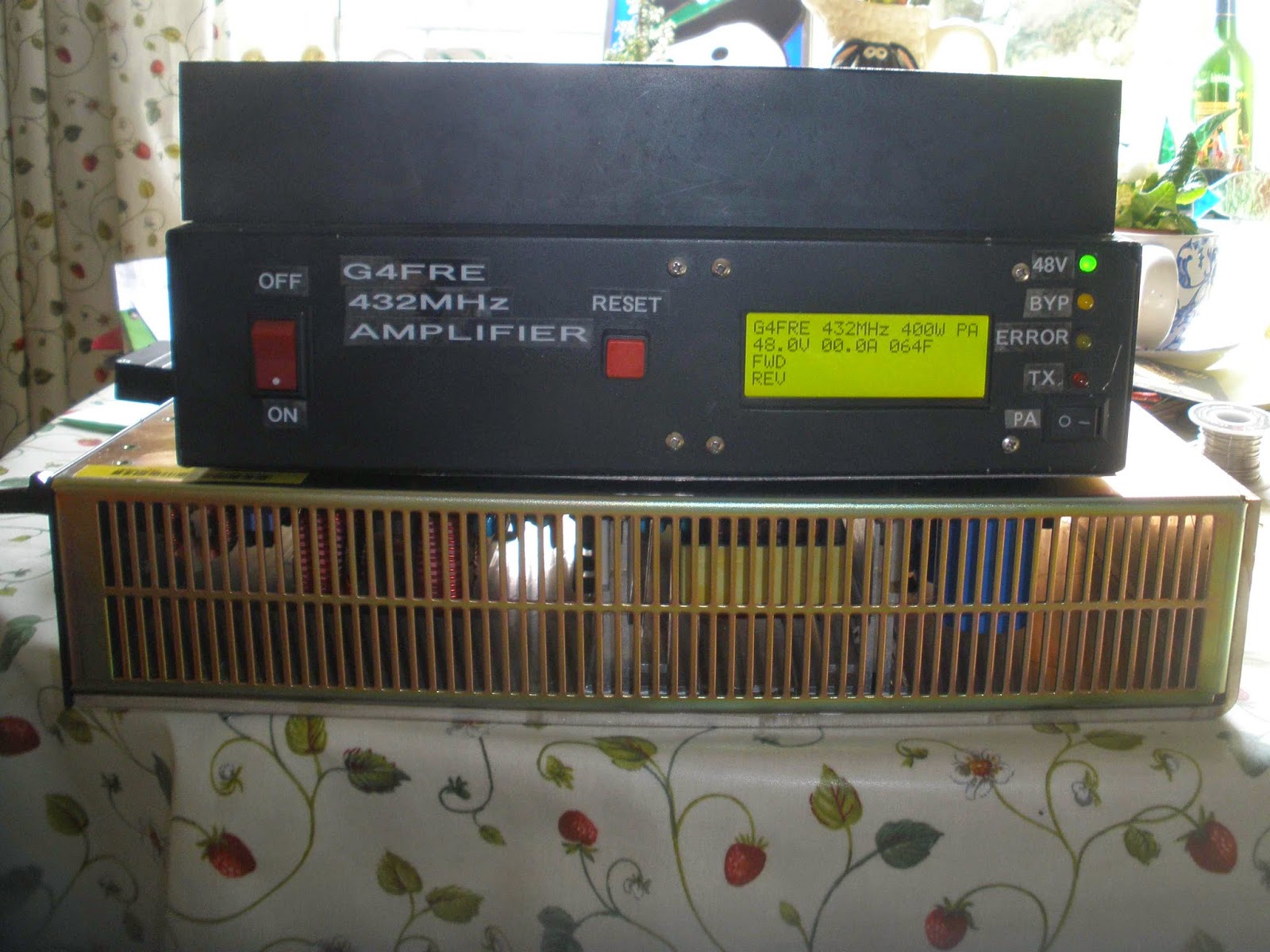 Having got the 2m Anglian up and running it was time to  interface it to the 400W solidstate Amplifier.  Two features were needed:-

A bypass switch was added to the front panel along with a bypass LED. A phono socket was added to the back panel for the Transverter output. An hour was spent adjusting the PIC code and all feature additions were accommodated. Also incorporated was the LCD showing the alarm trigger levels at amplifier startup

Locking the 2m Anglian Transverter to an external reference

G4DDK had mentioned it was possible to Injection lock the 116MHz oscillator of the Anglian Transverter by Injecting 116MHz into the LO port of the Transverter module. In my parts collection I found an early 116MHz DFS module, similar to the design used on 96MHz described at  at http://g4fre.com/dfs9096.pdf  except it used (10MHz * 11)+(3 * (10MHz/5)) and three 116MHz crystals. The output level was ideal at +3dBm While monitoring GB3VHF it was found to put the transverter onto the correct frequency as opposed to the free running frequency.

Having proved it worked, I then mounted the DFS116 inside the box. A slider switch (less likely to get damaged portable than a toggle switch) was used to remove the 13V from the DFS when there is no external 10MHz applied. The output from the DFS did not need disconnecting from the transverter LO input when powered off.
Posted by g4fre at 14:34 No comments:

Using the Anglian 4m Transverter with ANAN-10 and N1MM logger+

This morning I decided using the K3 with the new Anglian 4m xverter for the 70MHz contest would be too easy, so I decided to try hooking it up to the ANAN-10 and trying to use it with the N1MM Logger+ software.

Its easier to use the TX port output with a 20db attenuator than the xverter port output. If you do use the XVERTER output, the TX port has to be terminated, as it still produces 0.5W output and Powersdr will complain of SWR alarms. As previously determined, a 30MHz LPF is always needed on the output.  I used the EOT output pin 25 of J16 to key the transverter. The Mic input had previously been wired for the KX3 PTT microphone

Powersdr makes the ANAN-10 look like a TS2000 to the N1MM software so N1MM could track the frequency through a com0com virtual serial connector.  I used a COM4<>COM5 pair.

Tuning Powersdr through the beacons was a challenge, so, having remembered I had a Griffin powermate USB knob I Installed that on the windows 7 64 bit machine (the driver/software on the griffin site for Vista worked fine). I configured it to tune the rig up and down. This worked fine BUT ONLY if Powersdr had focus. When N1MM had focus the tuning knob did very strange things to the frequency.  This was overcome by deleting the default setting entries in the Griffin setup software. I then discovered (after reading the N1MM documentation) it was possible to tune the radio (only in run mode) from the keyboard. This scheme worked well.

The transverter produced 7W into my loop antenna in the loft. A few QSOS were made on SSB with locals then my thoughts turned to CW. Initially I used the Powersdr CW keying facility as I failed setting up the N1MM keyer to send cw through the CAT connection. Unfortunately the paddle connections were swapped over so G4BRK got to suffer my cw with the paddle operated upside down ( you can swap the paddles over in Powersdr I later found out, but its in the <DSP><CW> tab!) I then worked G4BWP (my best dx) then G4RFR on CW.

After the contest I went back to looking at the N1MM keying. I discovered, (also in the <DSP><CW> tab) that, whilst leaving the primary cw connection as "radio", (ie its key jack) a secondary connection may be set as a com port (COM6 in my case) and the RTS and DTR set to convey the cw and PTT signals from N1MM. Another com0com virtual port pair was set up (COM6<>COM7). In N1MM in the <configurer><hardware> Tab,  COM6 was set up as a "CW/other" connection with RTS and DTR appropriately assigned. This then worked fine