As it was IARU contest weekend and G8GTZ was going to be portable at Dunkerry Beacon IO81FD it seemed an ideal opportunity to extend the 24GHz DATV record from Cleeve Common IO81XW81. It would also nice to try out the upgraded 6GHz FMTV system. so a trip to Cleeve common was setup for the Sunday morning

Friday night I checked out the 24Ghz system and was getting low transmit output on both DATV and SSB. Many hours were spent investigating with no success

Saturday morning I got out the spare 2W W2PED amplifier module. Over coffee I spotted that the replacement amp had 6 bias pots, the installed amp had 5 bias pots. Analysis showed that one of the Bias pots had come off the installed board. The multiturn pot is very small so I had to resort to raiding a 2Ghz amp board to harvest one. It was installed and the bias set to match the voltage on the replacement module. After many lost hours we were good to go

Sunday morning, Arriving on site at 1030 first the FMTV was setup 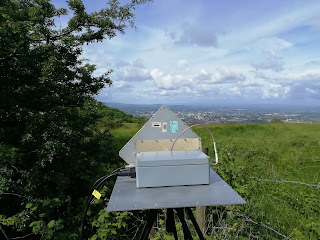 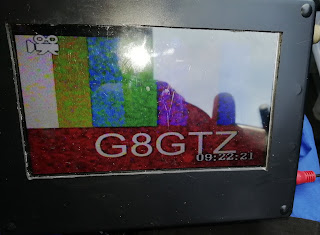 After the 2 way QSO the FMTV gear was then removed and the 24GHz equipment Installed. 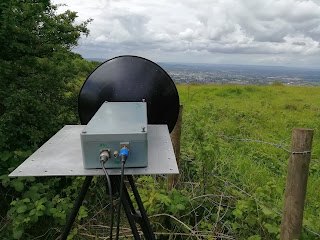 To align the antennas we had a 24GHz narrowband FM QSO, Noels signal pinning the s-meter on the FT817, looked promising. I then transmitted DATV and Noel instantly saw the picture:- 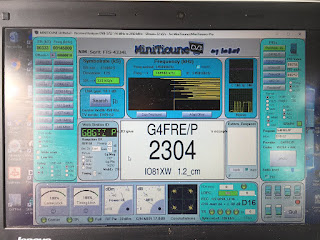 Noel then transmitted and I instantly saw TV data being received but no picture. After Noel trying lots of datarates and parameter permutations a picture was finally seen:- 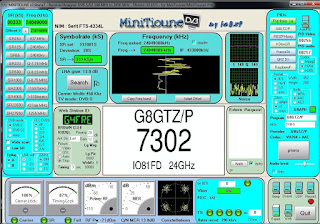