Having got the 6GHz system going for the trip to Brown Clee, it soon became apparent that, although the system worked well on sunny days, it would be unuseable on rainy days. Time for a rebuild! 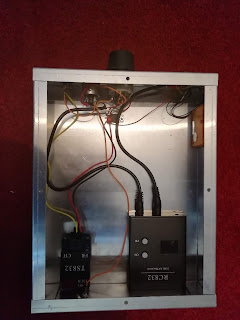 Looking in the junk box I rediscovered an  8W power amplifier module obtained from G3OHM. I also found the connection details and with the help of G4JNT constructed a power supply.  It worked fine and i discovered it worked with just +-10.5V on the opamp supply, good news when running off a car  battery. The only issue was that it was quite a chunky unit, hard to mount at masthead.  I found a suitable waterproof diecast box and worked out that by dismantling the amplifier modules and PSU board it would fit

I also discovered a smaller FPV transmit module with adjustable power output to avoid overdriving the amplifier. 20mW through a 10dB attenuator proved to be sufficient. The following is how it ended up 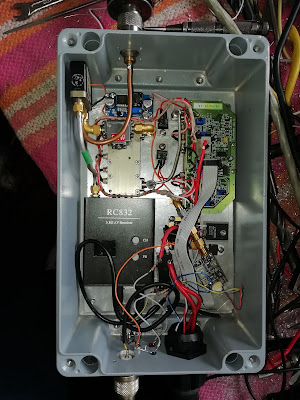 It is powered by a 6 pin Bulgin power connector (the same as used on my rotators) allowing the use of thicker/more cables to reduce the voltage drop on Transmit (it takes around 4A when it produces 7W of DATV) Video out of the receiver is via an N-type connector, video in to the transmit module is via a TNC connector (more waterproof than BNC) There is room for a receive preamp and filter if needed. Now to try it out
Posted by g4fre at 19:30