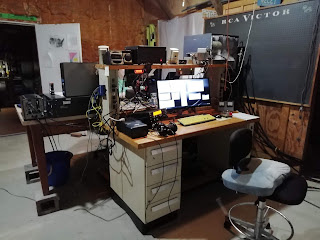 Having had so much fun in the ARRL 160 contest I returned do the CQ 160 in January from DEMI. To avoid the previous issues with connecting in Charlotte I flew on an American Airlines codeshare flight which was on a BA plane direct from Gatwick to Orlando, arriving early at 1430, Steve and Sandy met me at Orlando and after a fish supper we drove the 3 hours to Live Oak.

The rules for this contest are not quite the same as the classic CQWW rules. Multipliers are US states+VE provinces+countries. Although DX stations (and only DX stations)  send their zone, they dont add to the  multipliers!


The contest started at 1700 local on Friday under the call K0DI. Unfortunately the starting operator was stuck on a plane at the gate in Washington, so I was volunteered to start. Calling CQ for 10 minutes, nothing much happened, then the pileup started, which was a new "run" experience, which I continued for 2.5 hours before switching to mult duties retiring at 2300 I returned at 0600 and operated till the band closed at 0830 working some JA but no VK/ZL

Having not experienced the overnight shift I returned at 2300 to teamup with Steve. I ran , he searched. I ended up running for 8 hours. The band closed around 0800 sunday morning again . We resumed at 1600 that afternoon  after a visit to the club shack and surprisingly had 17 qsos in the last hour

For light entertainment on the monday after the contest we replaced the power supply in a quadra VL1000 amplifier which had been hit by lightening.